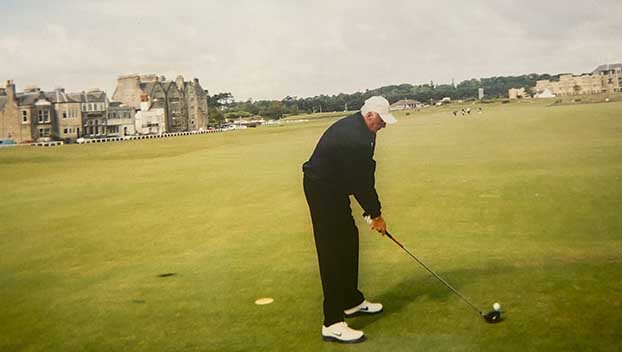 What better time than the eve of the 150th Open Championship on the Old Course at storied St. Andrews to share memories from a June, 2008 trip around that historic links. Yes, I played St. Andrews.

It was part of an 11-day trip through Ireland and Scotland with my old Centralia, Missouri buddy Ron Ashworth. We played 12 rounds over seven amazing courses, all of which were ranked in Golf Magazine’s world top 50 at the time.

St. Andrews, recently listed as No. 1 in Scotland and Ireland, was the cherry on top of our bucket list. And the toughest to access. You don’t just show up and secure a tee time at the “Home of Golf.”

Ironically, it was a fellow from Liberty, Texas named Jack Willoughby who helped make it happen. Willoughby owned and operated one of the most popular spots in the town of St. Andrews – the Dunvegen Hotel and pub – and had considerable influence.

Put in touch with him by a Houston Chronicle sports columnist friend named Ed Fowler, Jack agreed to insert our names into what is called the daily “Ballot.” If you are lucky enough to be drawn out of the Ballot, a tee time awaits.

I will always believe Jack had something to with our good fortune.

Though the Old Course wasn’t close to the best I’ve ever played, it left an impression like no other. The golf history alone elevated the experience to a higher level, but the uniqueness of the layout, the stories the caddies told, the crazy bunkers to be avoided and the mammoth double greens were a constant source of amazement.

For openers, your first tee shot is into a fairway that’s so wide you couldn’t miss it if you tried. But, with the ghost of old Tom Morris seemingly lurking, passing tourists watching in the background and the knowledge you will only get to do this once, it’s not an easy shot.

Unlike my disastrous first tee ball at Augusta National, recounted in this space in April, I handled the “pressure” and went on to par the first hole. According to my framed scorecard, I shot 82 with six pars on the front and four on the back. Unfortunately, no birdies.

In all honesty, the Old Course played relatively easy because it was a calm, reasonably mild day. Without wind, the layout is much less difficult to navigate. I avoided all but three of the 112 bunkers and only three-putted three times on biggest greens I’ve ever seen.

And, oh, those bunkers. Hell bunker on the par 5, 14th is 3,000 feet in diameter and seven feet deep. Jack Nicklaus took four to get out of it in 1995 on the way to making a 10. The caddies make sure you know that before you hit your second shot.

As you will see on the Open telecast this week, the bunkers all have names that stick. There’s the Coffins, the Beardies, the Principal’s Nose, Deacon’s Slime and the notorious Road Hole bunker. They are mounds not a bunker, but you need to avoid Mrs. Granger’s bosoms on No. 15.

There are just so many memorable shots to attempt, like the tee ball on 17 that must clear the corner of a hotel to have much chance at par. And the drive on 18 where you are hitting into a backdrop of ancient buildings and trying to avoid the dicey Valley of Sin.

A final highlight was crossing the revered Swilcan Bridge on the way to 18 green. You pause to take a photo on the bridge and think of the greats like Watson and Palmer and Nicklaus who bid farewell to the Old Course the exact same way. You get chills thinking about it.

All in all it was an experience that separates golf from other sports. You can attend a game at Yankee Stadium, or Fenway Park or Lambeau Field or any other historic venue. But you can’t play a game there.

In golf you can, and it is mind blowing.

CHIP SHOTS: Chris Stroud overcame a couple of lengthy rain delays to put together his best tournament in months at the Barbasol Open in Kentucky. Finding his putting stroke as he promised last week, the PNG ex posted rounds of 69-66-70-70 for a minus 13 275 that left him tied for 28th

Stroud, after finishing No. 116 in strokes gained putting a week ago at the John Deere, was third at the Barbasol. The flat stick helped him make 22 birdies and an eagle and surely sent his confidence soaring.

In the Friday 2 ball at Zaharias, teams captained by Dwayne Morvant, Kenny Robbins and Bob West tied for the front at minus 1. Minus 1 also won the back for the Morvant team that included Rusty Hicks, Rick Pritchett and Keith Marshall.

The Wednesday DogFight at Zaharias was played in an all-points-count format. Winning with a robust 37 points was the team of Robbins, Earl Richard, Lonnie Mosley and a ghost fourth. A distant second with 28 points was the foursome of Gary Whitfill, Hicks, Jeff Rinehart and Paul Duplantis.