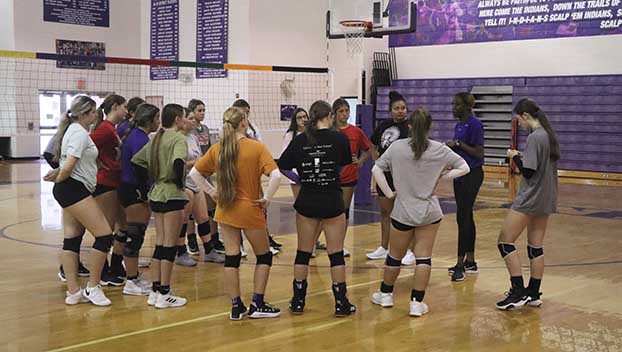 PORT NECHES —With the start of the season about a month away, players on the Port Neches-Groves volleyball team feel like they are on the right track.

Bryleigh Bean and Payton Metts are the only incoming seniors on the PNG squad. Both have been attending summer workouts and participating in summer league play.

“I feel like it has gone good and we have gotten a lot better,” Metts said.

Bean said the workouts keep the team together and give the players a chance to work with new coach Bre’Ala Box.

The team has been meeting twice a week for skill workouts. Both players said they enjoy playing games during practice as a way for team building and getting the competitive juices flowing.

Box gathered the group into a huddle to tell them about their progress and what she liked and what still needed work.

Bean said they earned second place in a summer league tournament in Beaumont.

“We beat Bridge City and almost beat Orangefield,” she said. “It was close. It was 23-25. We did really good.”

The team, which is relatively young, has played together for quite a while, helping to build a bond that coach and players hope leads to wins when the season starts.

“It has made our chemistry a lot stronger,” Metts said.

Both said they want to get past the first round of the playoffs.

Box said she has been able to settle in and feels more comfortable in her new role. She said the summer program has really allowed her to get to know the team and help them get acclimated to her style of coaching.

“Now that I am getting to know the girls and getting to work with them, I am getting more excited,” Box said. “The season is about three or four weeks away, so it is getting pretty close. Getting them in the gym has been great. They are working really hard. There are still some things they need to work on, but I think we will be ready when the season starts. That is how I am feeling.”