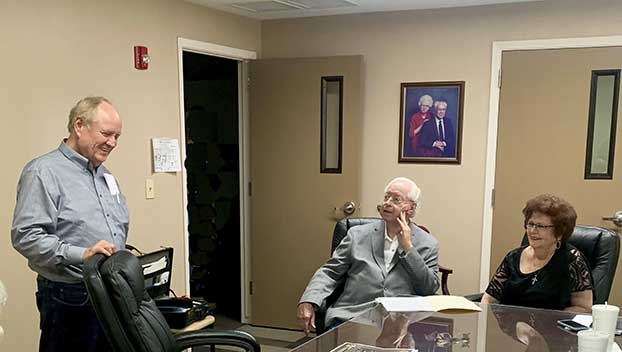 As a service organization that aims to donate funds to a multitude of non-profits, the Port Arthur Evening Sertoma Club could have sold two unused lots in downtown Port Arthur to help fund their various projects.

But instead, board members unanimously voted recently to donate the land to the neighboring Museum of the Gulf Coast and help expand its mission.

“We could have sold it for quite a bit of money, but the members of the club just felt like the Museum of the Gulf Coast is something that’ll be here for a long time,” said Roy Yeaman, group treasurer. “And since it’s adjacent to them, one member suggested we donate it to the museum.”

The two groups met June 14 to finalize the transfer of land. 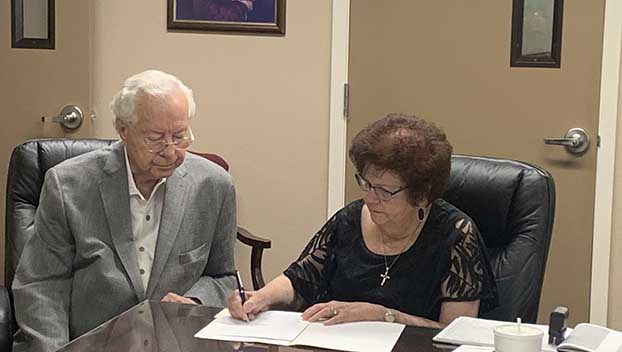 Sam Monroe and Barbara Cropper finalize the transference of land from the Port Arthur Evening Sertoma Club to the Museum of the Gulf Coast. (Courtesy photo)

“We’ve worked with the Sertoma Club through the years, and we have been able to use the property on and off,” said Sam Neal, director of the Museum of the Gulf Coast. “It’s got a wonderful covered area out there that has withstood many a storm — that’s always a good sign.”

The covered area, along with the concrete it protects, was part of the club’s goal to create a community building that could be utilized by the multiple Sertoma Clubs in the region.

One lot was donated by a resident and the other by the city.

But over time, the club that gives most of its money to local charities was not able to keep enough to finish the project. And the number of clubs that would utilize it also began to dwindle.

For a while, the land was rented out by Mardi Gras of Southeast Texas.

“Once they moved out of Port Arthur, it served no purpose for us,” Yeaman said. 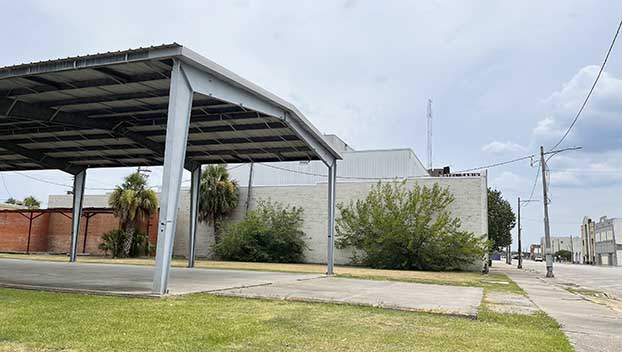 The land recently gifted to the Museum of the Gulf Coast includes a covered area. (Monique Batson/The News)

But it has purpose now.

Neal said the land is a great addition for Saturday events and other projects that require overflow.

“We’ll have kids’ tours that come from all the area schools, and sometimes they’re making a day of their tour to see different spots as they’re out,” he said. “And they’ll come to us and want some place to have lunch, so we’ll set that up for them so they can grab their sack lunches and have lunch under there.

“It just gives us all kinds of neat opportunities for special programs we can have outside, and being able to handle any kind of inclement weather that comes along.”

Groups supported by the Port Arthur Evening Sertoma Club include the Capland Center, the Hospitality Center, the Salvation Army and the United Board of Missions.

As a group founded on the importance of hearing health, the club provides a scholarship for a Lamar University student obtaining a master’s degree in Speech and Hearing Sciences, paying towards each semester through graduation.