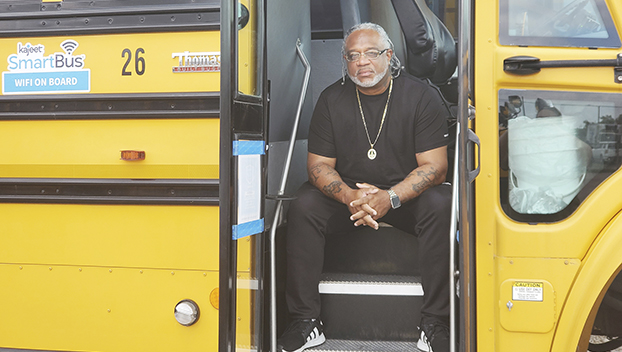 Eric “Sarge” Charon sits on the steps of a Port Arthur Independent School District bus. In 2017 he drove a PAISD bus to bring countless people to safety during Hurricane Harvey. (Mary Meaux/The News)

Eric “Sarge” Charon doesn’t really know how many people he helped in the 32-hours he drove a school bus getting people to safety during Hurricane Harvey.

Charon, an employee at Thomas Jefferson Middle School, signed a form saying he would work several hours transporting people to the Bob Bowers Civic Center, but plans changed as the water began to rise. What started as a simple few hours of volunteerism turned to a mission of saving lives.

“It took 32 hours before I realized I hadn’t gotten any sleep,” Charon said, adding he was likely just running on adrenaline.

This year marks five years since Harvey stalled over the area dumping a record-breaking amount of rain, flooding much of Port Arthur and surrounding areas and destroying homes.

“Originally I was supposed to do my shift, then was supposed to go to Dallas and meet my family. I never made it,” he said. “I was able to call them on the phone and let them know I couldn’t make it. I was glad my son was with me in a way, then when everything started happening I wished I would have sent him with my family.”

An American Red Cross shelter was opened Aug. 29, 2017, at the civic center in Port Arthur, and Charon was busy bringing people there for safety. The weather soon became the enemy.

Working to maneuver around a turn, the bus got stuck in a ditch.

“More water was coming in and we had a bus full of people trying to get to the civic center. I called down to transportation (department) and told them what was going on,” he said.

Due to the rising water the bus was close to being on its side and it was dark outside by this time. Police officers and even a dump truck tried to pull the bus from the ditch, but it was eventually a tow truck that did the job.

In all of the chaos, Charon kept his wits about him. When asked how, he said he doesn’t know.

“I did stay calm and it helped my mindset,” he said.

But overnight the civic center flooded and the people inside needed to be brought to another location for safety.

A police officer onboard with Charon had a key to the Parker Center on Lamar State College Port Arthur’s campus and, with permission; they brought some people there.

Debra Ambroise and her now late husband Clonie remembers all too well the night of the storm and clearly remembers seeing Charon when she and her husband were being brought to safety.

“We were on a school bus and I clearly remember seeing him as we passed Woodrow Wilson,” she said. 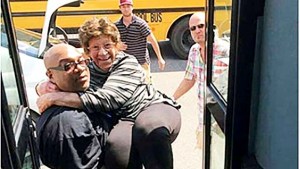 Eric “Sarge” Charon sits on the steps of a Port Arthur Independent School District bus. In 2017 he drove a PAISD bus to bring countless people to safety during Hurricane Harvey. (Courtesy photo)

Who is Eric Charon?

Charon is a product of PAISD and a graduate of Stephen F. Austin High School. He is also a veteran of the U.S. Army.

As an employee in the district, he works to lead students to success inside the school, as well as outside.

He has, for a number of years, been part of Camp Seaport as a volunteer counselor. The Camp shows youth first hand the work of maritime jobs.

He’s also part of the district’s first maritime education group — Thomas Jefferson Middle School’s Maritime Club. The group has toured the Port of Port Arthur where the students learn the importance of the Port to the local, state, national and global economies.

In the time since Harvey, Charon has run into many people he helped during Harvey. He doesn’t remember all of them — there were many.

But they remember him.

One time he was at Walmart buying his son a hoverboard when a woman he didn’t know told him to move out of the way of the register so she could pay for his items.

He was shocked and thankful just as he was when people he did not know paid for his meal while he was out and about.

He doesn’t see himself as a hero.

“To me the real heroes are the ones who came out here in boats to get people,” he said. “I remember after the first night and the next day. I had family here, stuck, in the water and I couldn’t get to them.”

Charon saw some men in an airboat and asked if they could help. He got the bus to the Lakeside area and his grandmother was stuck in a house. The men with the airboat brought Charon to the house, got his family and brought them back to the bus.

Then the boat driver went street-by-street bringing people back to his bus so they could be brought to safety.

And it wasn’t just the men with the airboat. There were many people in boats who came to the rescue of those in need.

Should there be another storm, Charon will evacuate if asked to do so. He remembered Hurricane Laura in 2020 when Mayor Thurman Bartie called for mandatory evacuation, saying “if you stay, you’re on your own… just know it’s you and God.”

The storm did not hit the city and some people, Charon said, were mad at the mayor for calling the evacuation.

“But you never know. If something would have happened …” he said.

Ambroise is praying we don’t get anything like Harvey ever again but believes the city has inner strength to deal with adversities.

“Port Arthur is resilient,” she said. “We will do what we have to do.”