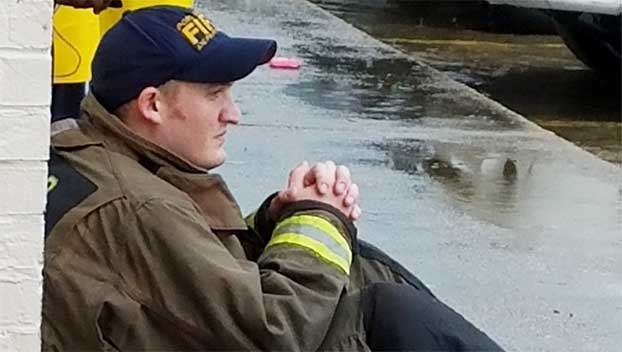 Alex Rozell sits outside Max Bowl on the morning of August 30, 2017. He was performing Hurricane Harvey rescues, and was on his third day without rest. (Monique Batson/The News)

Shortly before 9 a.m., now-Captain Alex Rozell sat outside Max Bowl in Port Arthur with his hands clasped and a look of exhaustion on his face.

The moment was captured in a photograph that circled social media.

“Right before that picture was taken, some lady from EMS showed up and she had a box of cell phones,” Rozell said recently. “I finally got to speak to my wife and my kids. That’s why I was breaking down at that point; I finally heard my wife’s voice and I finally got to talk to my kids. I knew they were OK.”

It was his third day on the job with no rest. It wouldn’t be his last.

Rozell began his career with the Port Arthur Fire Department in 2013 at the age of 21. And from then until 2017, his career had mostly involved house fires. 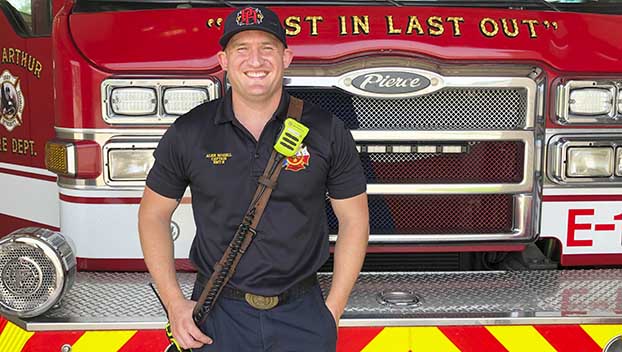 “Things got really real after Harvey,” he said. “They haven’t really slowed down. Between Laura, Delta, COVID, TPC, the silo fires — we’ve had a long stretch of years where things have been crazy.”

The firefighter works 24-hour shifts and was preparing to leave when Harvey began moving into Southeast Texas on Aug. 29, 2017.

“There was another guy that lived out in Evadale who told one of the chiefs that his family’s house was flooding,” he said. “Of course, by the end of it, half our houses flooded. But nobody knew how much rain we were going to get at that point.”

Some of the men who were about to clock out were asked to help cover for those who couldn’t make it, and Rozell was sent to the Robert A. “Bob” Bowers Civic Center where officials were setting up a shelter. Later that night he would join a department captain in an airboat where they performed rescues and brought people to the Port Arthur Little Theatre. At the time, that was high ground. But it wouldn’t be long before that intersection became a boat launch, and those evacuating sought shelter at Max Bowl. And the Civic Center, which had been turned into a shelter, began to flood.

Rozell had yet to talk to his wife and children, and had no idea if his house on Saba Lane in Port Neches was underwater. He crossed paths with a Port Neches firefighter and inquired about the area.

But when he was able to speak to his family, he learned his parents had checked on his house and it wasn’t flooded.

Others still were, so Rozell and other first responders resumed high-water rescues. “When the rain started, we all put on our bunker gear to keep us dry, which was a horrible idea,” he said. “In retrospect, none of us will ever do that again. We had several guys, myself included, that fell in some ditches. When you’re in full bunker gear that’s already soaked, you can’t swim. That happened to several guys more than once, where you’re under water and you’re just praying.”

They hopped from boat to boat and worked to remove residents from apartment complexes that had a high population of elderly and physically disabled tenants.

“I remember one guy…to us the water was mid-stomach,” he said. “To him the water was chest high because he was in a wheelchair. That was really some of the more rewarding parts. I really felt like I was doing good work there.”

That night he was able to rest for the first time at Station Six near Texas 73 and 9th Avenue.

“The recliners there were older and didn’t pop up all the way,” he recalled. “We were sleeping in the recliners, but our feet were in the water. But it felt great. We were able to rest a little bit.”

As the floodwaters began to recede, Rozell met up briefly with his wife and kids and then returned to the station where he was told to go home and rest for 36 hours.

“And then the house fires started dropping because they turned the power back on,” he said.

Eventually he was able to make it back home, riding back with a first responder from Port Neches.

But navigating through a hurricane isn’t the only thing he learned from Harvey. Now, when a storm approaches or disaster strikes, his first priority is to get his wife and kids somewhere safe.

“Once I know they’re someplace good, then I’m good and I can focus on what I’m doing,” he said. “You can tell when guys don’t know if their families are OK. That’s when the camaraderie here really kicks in. You help those guys out when they need it.”