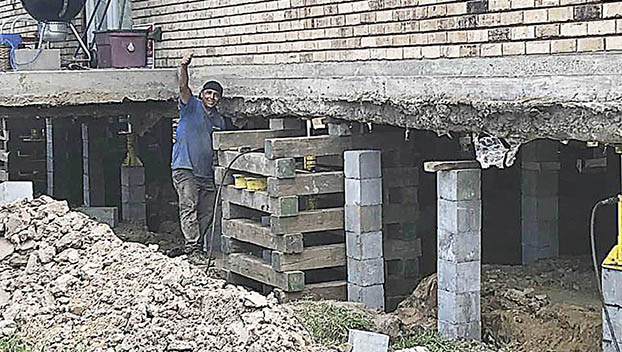 A crew member from Planet Three Elevation gives the thumbs up during a house-raising effort in Orange for Carl LeBlanc. (Photo courtesy of Carl LeBlanc)

After Tropical Storm Harvey brought record flooding to Southeast Texas in August 2017, many people were forced to consider the high cost of elevation — $100,000 or more per house.

Some residents in communities like Bevil Oaks, where residents had as much as seven feet of water in their homes, said they would not return and rebuild.

But thanks to FEMA Hazardous Mitigation Grants, home elevation is affordable for several Orange County homeowners.

Carl LeBlanc, 65, a homeowner on the west side of Orange, said Hurricane Ike flooded his house with 38 inches in 2008, and Tropical Storm Harvey pushed another 13 inches of floodwater inside.

“It got close, but didn’t flood for Imelda,” he said. 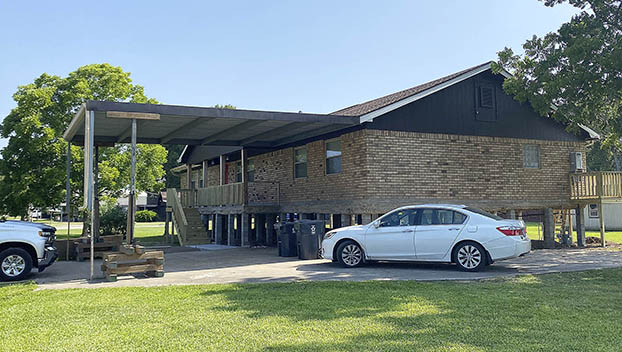 Carl LeBlanc’s home on the west side of Orange is shown raised. Hurricane Ike flooded his house with 38 inches in 2008, and Harvey pushed another 13 inches of floodwater inside. (Eleanor Skelton/The News)

LeBlanc was one of the first homeowners to apply for the FEMA grant through Orange County. Over the last six weeks, Houston-based Planet Three Elevation crews raised his house five feet and two inches. Their target height was five feet.

“They said they’d rather go a little more than under what they quoted,” he said.

LeBlanc said he was told Orange County was ineligible for some of the programs he researched. The FEMA grant is what made it all possible.

His original cost would have been 30 percent of the grant funds allotted for his home, he said, but the Orange County grant office found additional funding through another state program.

Planet Three Elevation is almost finished with his house now, including building stairs to reach the front door. They will return to cover up the cinderblock posts underneath and add skirting, he said.

“I had 42 jacks underneath my house,” he said. “What they do is they tunnel underneath. You can hear them tapping their shovel underneath your slab right in the middle of the house. They use the hydraulic jacks, and they drive those blocks in the ground. They’ve got a hole in the middle — they put a rebar pin that keeps it from sliding off.

“They keep driving them until they reach a point of resistance, and that’s gonna be the lifting point. Then they move to another spot and keep driving until they get as many points as they can get.”

LeBlanc’s wife and two grandchildren also live in their home. The family stayed in the home while crews dug underneath the foundation, but could not be inside during the lifting process.

“When they lift, you have to get out, because they cut the sewer lines and water line,” he said. “We were out five or six days, I believe. The grant pays for that, too, being out of your house. You have to turn in receipts.”

LeBlanc applied for the home elevation grant in 2018.

12 homes in Orange County were approved for the grant, he said.

“There were two options, either elevate your house or buyout,” he said. “But I don’t believe in the buyout because you lose tax to the county and the state and the city, and the school district.”

His flood insurance increased to $2,500 after the recent flooding. Now LeBlanc said he is waiting to receive an elevation certificate that he can submit to lower the cost. 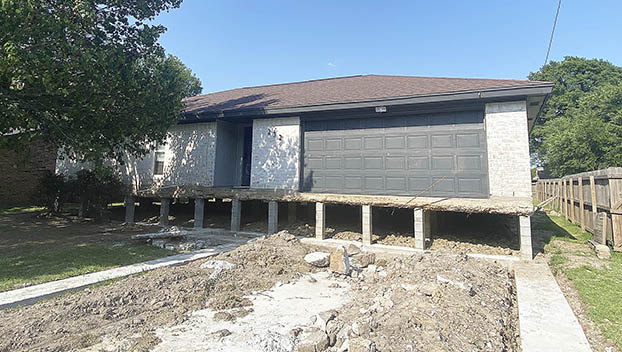 Following Hurricane Harvey, Rani Dillow moved in with her parents, who did not flood, but then their house burned down. (Eleanor Skelton/The Leader)

Another homeowner, Rani Dillow, 36, who lives around the block from the LeBlanc family, started elevating her home through the grant. Planet Three Elevation crews started their work May 4.

She bought her home in 2017, six months before Harvey’s landfall.

“I had two feet during Harvey, but I flooded about four or five times since Harvey, just in hard rains,” she said. “Not this past May, but May before last. I had to have contractors come back in.”

She moved in with her parents temporarily, who did not flood during Harvey, but then their house burned down while she was living there and they all moved into a rental.

The previous homeowner told her the home had three and a half feet of floodwater during Hurricane Ike in 2008, she said.

Her home was elevated four feet.

“I’m just glad that I don’t have to worry when it rains anymore,” she said. “I’m ready to see the finished product. They’re gonna ramp my driveway and put split-faced block all around on the edges where it’s open.”

Her garage is also four feet in the air now, but the crews plan to build a ramp so she can still pull her car inside, she said.

“That’s why I went with the company I went with, because one of the other ones raised my garage, but didn’t do anything with the driveway,” she said. “P3 actually listened to what I wanted.”

Dillow is grateful the grant program was available.

“I think they should try to push for more programs like this so more people can do this,” she said. 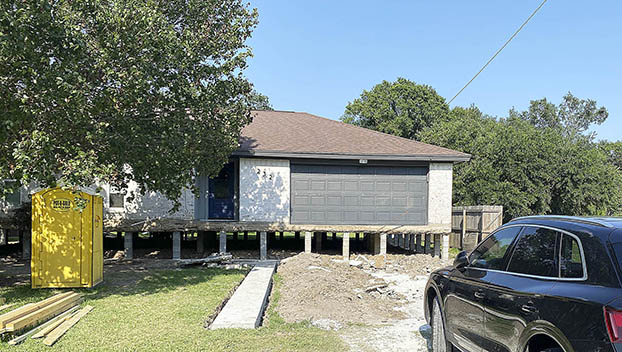