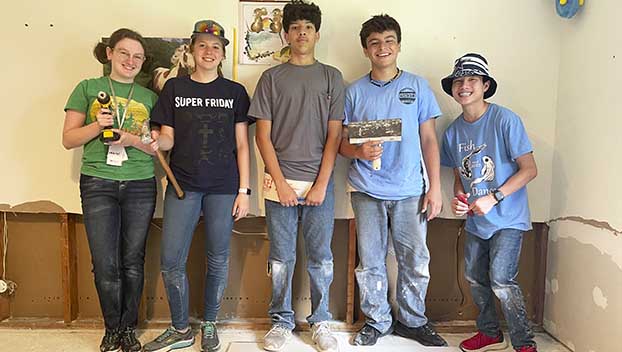 But it wasn’t because of the damage her childhood home on Barryknoll Lane received from Hurricane Harvey in 2017. This time it was gratitude for the 24 kids and five adults that arrived Monday to repair the damage.

“It’s just so humbling,” she said Wednesday through tears.

As Evers talked about the struggle her family has faced since the residence flooded in 2017, crews of middle and high school students worked this week to replace the roof and fix two rooms inside the house.

The two groups of students, one from Kingwood First Baptist Church in Kingwood and one from United Family Fellowship in Brownfield, are with Bounce Student Disaster Recovery. Along with students from Kilgore and Port Neches, the young adults will spend the remainder of the week working on storm-damaged homes in Nederland, Port Arthur and Beaumont.

The group, which operates through Texas Baptist Men, partnered with Orange County Disaster Recovery to work in the area, and are housed at First Baptist Church in Nederland.

“It’s actually kind of cool that we ended up in a house where we’re getting to meet a different church group, so it’s even more beneficial for us,” said Phil Boedeker of Kingwood. “The big thing is bringing the youth groups in, middle schoolers and high schoolers, to teach them. Some of them have never touched a hammer, and we teach them, ‘hey, we can do these sorts of things.’ 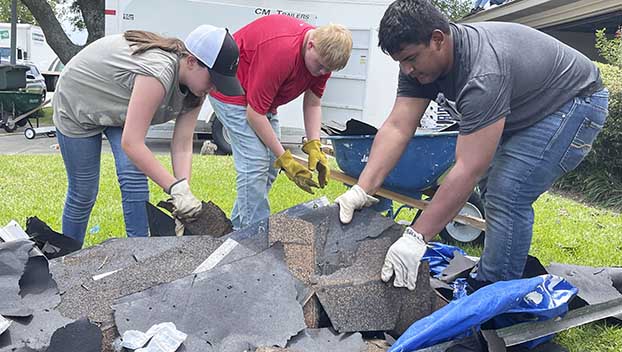 “But also in the end, it’s all about God and service. People open their homes to us and give us the opportunity to make it a little better for them. We get to go home at the end of the week a little more tired, but happier for it.”

Boedeker is one of two crew chiefs in a team with nine students and two adults that are working to repair at least two bedrooms inside the home.

The other crew chief, Adrian Martinez, is part of 15 kids and three adults from United Family Fellowship in Brownfield working to replace the roof on the residence.

“I’ve been on eight mission trips, myself,” Martinez said. “This is actually my first time leading a crew; I’ve been on a crew for the last seven years. I’ve done a fence with (Bounce), I’ve done a roof, I’ve done sheetrocking — they do everything.”

And the students, he said, are always on point with the mission.

“They’re great,” he said. “There’s times when I’ll leave a room to go help with another room, come back and they’re halfway done with the floor. It’s really amazing to see them get in there, get motivated and just really get excited about getting to serve like this.”

Evers said she and her brother, a police officer in San Marcos, have been trying to fix their mother’s house for five years.

“My mom has been living in this house ever since Harvey, so she’s been living like this — no floors, half the walls taken out, almost kind of like a shell of a house,” she said. “On (her brother’s) weekends off, he would come here and help put the house together. Then right at the beginning of the pandemic, he got hit in a motor vehicle accident, so he’s not physically able to continue doing this.”

He will soon be moving into one of the rooms under construction by the Bounce team, which will also be made compliant with the Americans with Disabilities Act.

“There was a lot of damage on the house, but also emotionally,” Evers said. “It’s great to see these kids come in and just help out of the goodness of their hearts. It’s very inspiring. They’re good, hard workers and they just don’t stop.” 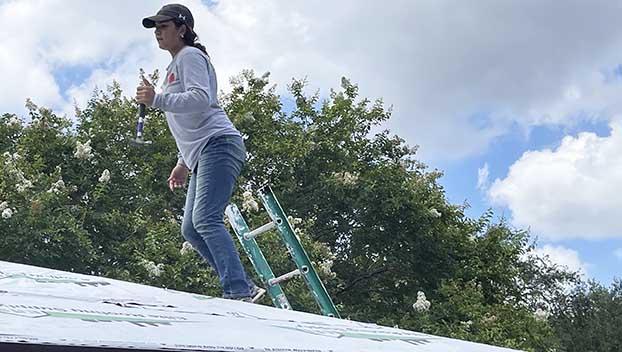 Kamryn Martinez, 17, works on a roof that was damaged in Hurricane Harvey. Martinez is from Brownfield. (Monique Batson/The News)

That energy is something both crew chiefs commented on.

“It’s incredible to see how motivated the kids stay,” Boedeker said. “We’re staying at Nederland First Baptist Church, so we get back there and they suddenly take a shower and have energy to go play gaga ball or something.”

“We’re sitting there watching them like, ‘I don’t understand,’” he said.

For Kamryn Martinez, 17, it’s energy that comes with a purpose.

The 17-year-old from Brownfield is on her fourth Bounce mission this week.

“I love going out and helping people,” she said. “It’s a really fun thing to do. Just to see their faces light up when they see all the progress that we’ve made, just hearing their testimonies and how they got to where they are and how we can help them makes us feel really good about sharing the Word of God. If you just pray and you just listen, God will bless you with those things. He has definitely blessed this lady and her home — not only to get the outside finished but the inside finished, as well.”