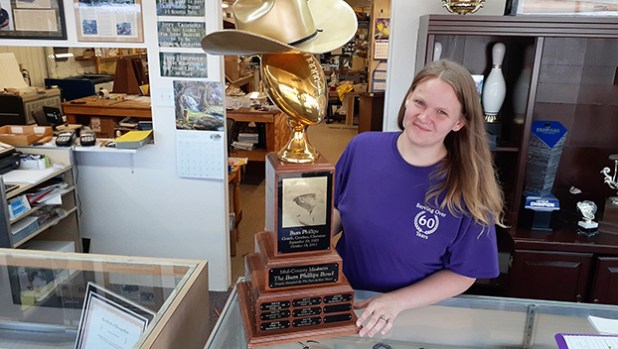 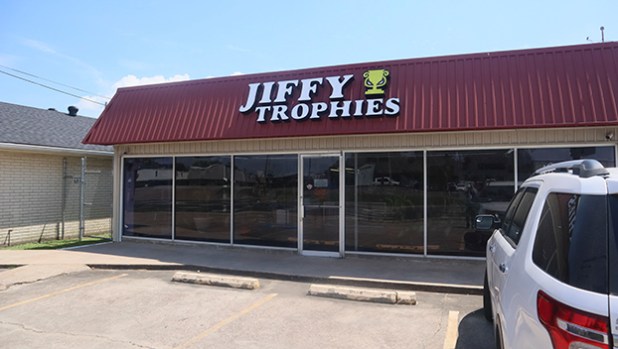 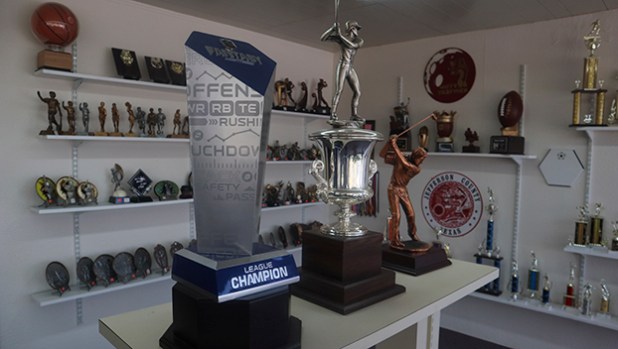 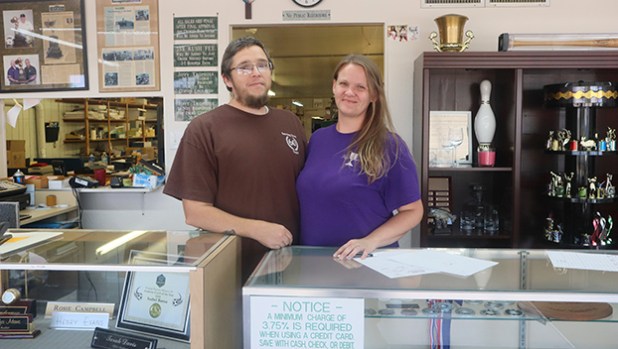 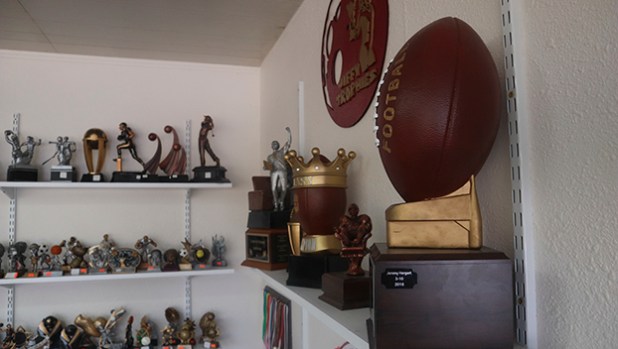 Some of the football trophies are on display at the store. (Chris Moore/The News)

NEDERLAND — Next month will mark a full year since the Davis family took over Jiffy Trophy in Nederland. The shop, which was previously run by Joe Vanderweg, has been around since 1959.

April Davis worked as an employee at the store, which is located at 210 S Twin City Highway, for 12 years before taking over with her husband Patrick Davis last year.

“It has started to pick up for us,” April Davis said. “We are trying to bring more stuff in. Usually it is just trophies and engravings. We are trying to do more woodwork and custom stuff.”

Davis said the trophy industry is one of the businesses that had a trickle-down impact from the pandemic. COVID prevents many teams from having youth organization leagues, which meant less need for trophies.

She said she enjoys how trophies have made her and her family part of the community and memories that will last forever.

Jiffy Trophy made the Bum Phillips Bowl trophy, which Port Arthur Newsmedia presents to the winner of the Mid County Madness football game between Nederland and Port Neches-Gorves each year. The trophy was made in 2014. Davis, who worked on the trophy, said it was one of the more unique trophies she had been a part of.

Port Arthur Newsmedia tours the trophy to local businesses in the weeks leading up to the big game, which is played in the fall.

“We haven’t done anything like that,” she said. “It got us a lot of publicity. That was cool to work with. When you go to the Market Basket and the banks and see it, you get to say you had a hand in that. Our little one goes around and sees our trophies around and tells us that she saw them. That is pretty cool.”

Davis said her children get to see first hand how the trophies are made and get to help with the process.

The owner said she is in the process of working with a screen printer and seeing the best way to implement it for the business.

“We’ve done some woodwork like clocks, cutting out signs and stuff like that,” Davis said. “We do some color portraits on awards. We do shadow boxes. We had to go to Houston to do a display case and get the base on it.”

As of now, the shop is completely run by the Davis family. April Davis hopes to pass it down to her children when they get older, much like the Vanderweg family did before them.

“My oldest one doesn’t want to do trophies right now, but you never know,” Davis said.