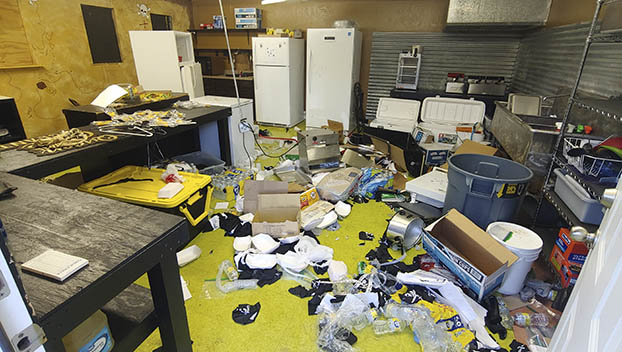 VIDOR — Board members of a youth football organization hope someone has answers after vandals ransacked a concession stand this week.

Members of the Vidor Pirate Intermediate Football Academy, which is a 501-c3 organization, discovered someone broke into a concession stand at the field and stole and broke several items.

“Being a non-profit, you have to have a board,” board member Jeremy Raley said. “We were in a board meeting discussing everything and one of our board member’s son was skating around the area and happened to glass on the ground. When he looked up, he saw the window was busted on the concession stand and it was open. He looked inside and saw that it was destroyed.” 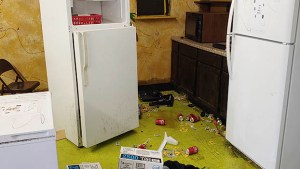 Board members are asking anyone with any information on the burglary to come forward. (Courtesy Photo)

The organization is still assessing the full damage, according to Raley.

“They pried up the bathroom door first and tried to bust through the sheetrock,” he said. “When they were unsuccessful, they busted up the window and crawled through there. It is hard to say right now (what the monetary damage is). As we clean up, we are seeing that things aren’t working. We had a warmer that is partially working. We had a fridge that had a door completely ripped off. The other refrigerator had a cord ripped out, so we don’t know if it shorted out before we get another cord put on it.”

The group also lost several crockpots, cases of drinks, boxes of candy, a cash register and a commercial microwave.

Raley said the organization is for children who are to young to play football for a school program. 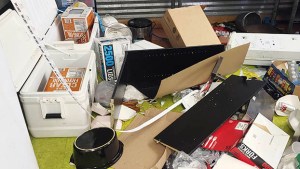 “We start off at flag football and go up to our senior division, which is right up to seventh grade,” he said.

Raley said the league uses the majority of the budget to make sure equipment is up to date and added this is not the organization’s first time to deal with vandalism.

“Football is not year round,” he said. “We budget for our season. We have some fundraisers to raise some money… Our No. 1 priority is the safety of our kids. That is where our money goes. When these things happen, it takes money out of our organization.

“We need a fence around our two football fields. We can’t do it because stuff like this happens and it takes the budget out. We have people that come out there and do donuts in the football field and rut it all up. That is a tripping hazard for the kids. We have to buy the dirt and fill it all in.”

Raley is also the administrator and campus coordinator for Crime Stoppers of Southeast Texas. He is asking anyone with information to come forward.

“A Crime Stoppers tip is what caught the guys that vandalized the Orange baseball park just recently,” he said. “I am hoping someone will come forward about this.”

If you have any information about this crime or any other crime contact Crime Stoppers of Southeast Texas at (409) 833-TIPS, website www.833tips.com or by downloading the P3TIPS mobile app. You will remain anonymous, and may be eligible for a cash reward.