JCSO: Nederland man holds woman against her will, leads police on chase 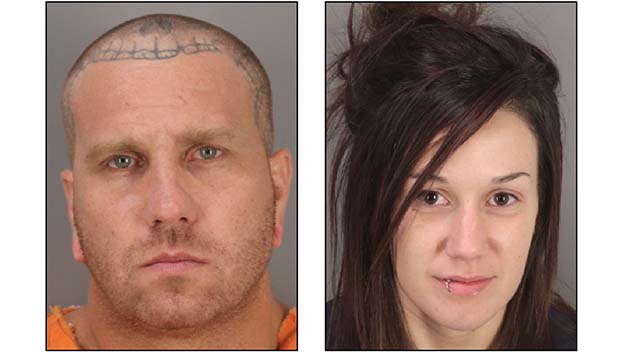 Prior to the attempted stop, detectives were able to positively identify one of the occupants as 28-year-old Kalynn Hallmark of Nederland, a known felon with an outstanding felony warrant.

The driver, 34-year-old Eric Sunderland of Nederland, refused to stop, fleeing from detectives.

This pursuit started on Cardinal Drive and ended on Highway 73.

Hallmark and Sunderland were arrested.

During the pursuit, detectives observed “Hallmark screaming, crying and pleading to get out of the vehicle, as well as Sunderland making his hand in the shape of a pistol and motioning as if he were shooting at the detectives,” a Sheriff’s Office release said.

During the course of the investigation it was determined Hallmark was being help against her will.

Detectives observed objects being thrown from the vehicle.

“It was later determined that the objects that were thrown out of the suspect vehicle were travel-size pouches that contained suspected methamphetamine, suspected marijuana, pharmaceutical pills and other drug paraphernalia.”

Sunderland is charged with evading in a motor vehicle, aggravated kidnapping and possession of a controlled substance PG-1.

The Sheriff’s Office offered thanks to the Port Arthur Police Department and Texas Department of Public Safety for additional assistance.

ON THE MENU — Take a look inside Port…