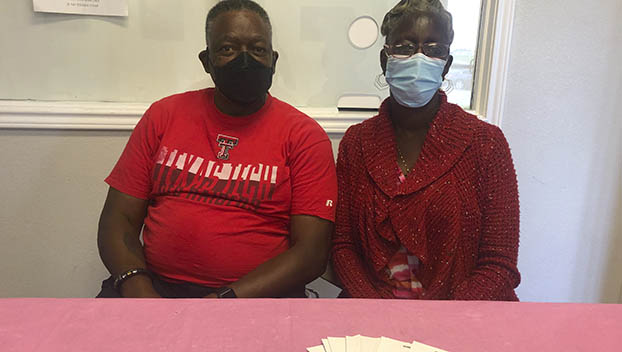 Emanuel Preston with the Willie Carter Outreach Center and Sylvia Johnson with Southeast Texas Faith and Community Leaders sit at the Port Arthur vaccine clinic Wednesday to pass out gift cards to children under 18 that received their first or second shot. (Monique Batson/The News)

A recent spike in positive COVID-19 cases was expected, but officials are still watching numbers carefully.

“We recently had graduations and graduation parties,” said Judith Smith, director of the Port Arthur Health Department. “I think we will see how the trend goes during the summer. Not many places are requiring masks, and more people are traveling. Hopefully, we can keep it stable.”

Smith’s comments came after the department reported a total of 65 new cases for Monday and Tuesday. Of those cases, 19 were in Port Arthur, 19 were in Groves, 27 were in Nederland and 10 were in Port Neches.

Smith said they have not given many first-time vaccines of late, and the number of children visiting the Port Arthur vaccination center is low.

Wednesday, Emanuel Preston with the Willie Carter Outreach Center, and Sylvia Johnson with Southeast Texas Faith and Community Leaders, were at the building on Cultural Center Drive to give $25 gift cards to any child under 18 who received a first or second shot.

“Kids are so vulnerable, so we have to try and protect them as best we can,” Preston said. “COVID has not gone away. There’s an uptick right now in Southeast Texas. We have realized that we can’t let our guards down. I’ve had all my shots, two booster shots, and if they come out with another one I’ll take it.”

Preston said the number of children who visited the center Wednesday was low, but the groups have alternative plans throughout other Juneteenth celebrations this week in order to provide children with vouchers they can redeem for a $25 gift card at the vaccination center.

One such event will be the City of Port Arthur’s parade and park entertainment Sunday. The parade begins at 6 p.m. at Procter Street and Stillwell Boulevard, followed by live music and family entertainment at Barbara Jacket Park on Gilham Circle.

On Wednesday, the Food and Drug Administration issued a recommendation for children 6 months and older to receive the vaccine. The Port Arthur Health Department does not begin to issue vaccines until approval is given by the Centers for Disease Control.

However, Smith said, they have been given the availability to preorder for that age group.

If approval is given, the department will work with educating parents and answering questions.

“We just want to be that source for them in case there are any concerns,” she said. “This includes infants, so we definitely understand.”

According to Texas Health and Human Services, 53.85 of Jefferson County residents 5 and older are fully vaccinated.