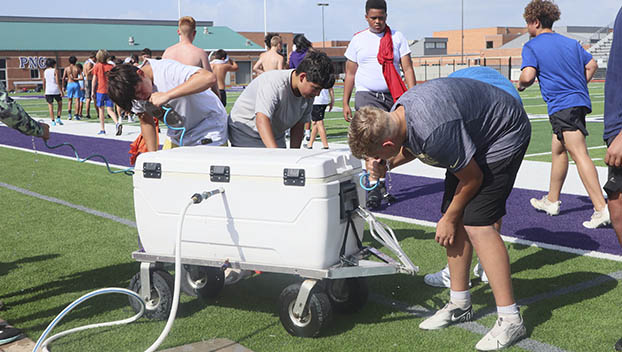 As Southeast Texas enters the hottest months of the summer, coaches are making sure athletes stay hydrated to avoid injuries and perform at their best.

Long gone are the days of the stereotypical coach, who says water breaks are for the weak. Coaches have become more informed on the importance of hydration and the impact on performance.

“I told the guys at the beginning, this isn’t like in-season, where everything is done on time periods and set breaks,” Nederland Head Football Coach Monte Barrow said.

“We have a big machine with water and they bring their own. I told them if they are thirsty, go drink. You don’t have to ask coach. We tell them if you are already dry mouth, it is too late. That is why we say to stay hydrated and not to get hydrated.”

Large containers of water with hoses attached can be found at all area practices with students gathered around to cool off. Most also opt to bring their own water bottles.

Forecasts for the area showed highs in the mid 90s for the week, which is the highest for the year so far.

History indicates that Southeast Texas will likely continue to get hotter as July and August near. Next week, temperature highs are projected to be in the upper 90s, with Sunday highs reaching triple digits.

Barrow said he and his staff emphasize the need for young athletes to drink the right drinks, too.

“You have to be careful what you put in your body,” he said. “The heat is no joke, especially for us old guys, too. In season we have student trainers that do a really good job of keeping an eye out and seeing which kids need something.”

“Your older kids have been through it before and understand how to deal with the heat,” he said. “For them, we preach hydration because when you are dehydrated, that is when soft-tissue injuries happen. For the young kids, we preach hydration more for the obvious reasons. For a lot of them, this is the first time working out in that. They don’t really know how to handle the heat. If you try to tough it out, it can put your body through a lot. The young big guys like eighth and ninth grade linemen have typically never pushed their bodies like that. Those are typically the ones you worry about from a safety issue.”

“We are hard on the food side of things, too,” he said. “You can’t come to workouts without eating breakfast. You are going to get sick. Your body doesn’t respond like that. Our strength coach does a good job of telling them to take care of their bodies.”