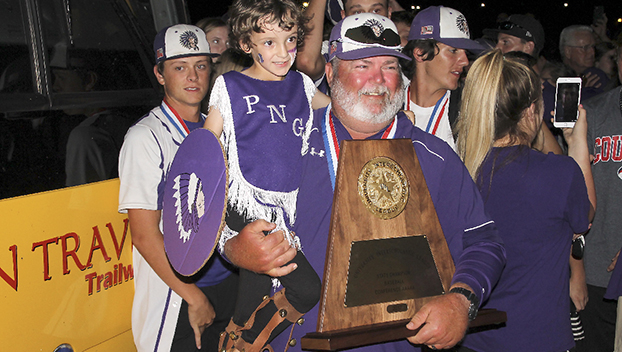 Former coach Scott Carter hasn’t missed a game as Bost and fellow PNG alum Khristian Curtis compete in Omaha for Texas A&M, which is one of the final eight teams in the college baseball tournament.

“It is exciting,” Carter said. “Those guys are getting things they are due. They work hard and it is starting to pay off for them.”

The PNG baseball coach has not missed a game this season.

“I am going to continue to watch,” he said. “If they continue and make it to the championship series, I will get on a plane and will be there.”

“I don’t get nervous,” he said. “I am just pulling for them. I just want them to be successful and do the best they can. Baseball is a game of failure and a game of success. Right now they are enjoying every minute. It is just fun to watch.”

The program has seen a lot of success since the 2017 state championship team. Bost was a four-year starter for PNG before moving on to A&M. Curtis, who wasn’t a member of the 2017 squad, joins several other former PNG baseball players, who are having success at the next level.

Curtis is not currently playing for the Aggies after he injured his elbow but is expected to recover from surgery. Bost is hitting in the four hole for the Aggies with a batting average of .360, hitting 43 RBIs and nine homeruns.

“It is surreal to watch Austin play as well as he has played and hit the ball as well as he has,” Carter said. “He was a big hitter for us in the lineup. He was one of the few four-year starters we had. To watch him succeed is not unexpected but it is very pleasurable.” 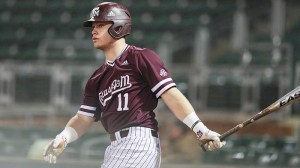 While many coaches can foresee greatness in teams in the weeks or months leading up to a season, Carter said he did not know the full potential of the 2017 team until they were already into the season.

“We go into every year wanting to be that team,” he said. “There was a point in the year. It was probably in the La Porte tournament when we played Dear Park, who would eventually be the 6A champions that year. Our kids stepped up and beat them and started believing. You could see the lights come on. They got better and better.”

Carter said the team, which was full of good athletes, would not have been as good without the winning mentality.

Cater has also kept up with the college careers of Carson Roccaforte, who was named to his respective all conference team at the University of Louisiana, and others who had major impacts on his program.

“This has been a really good year for PNG at the collegiate level,” Carter said. “Grant Rogers got Southland Conference Pitcher of the Year. Roccaforte did really well in the three hole for them. Khristian did a great job before he got hurt, but he will be fine and back. Ryan Sosa was at Panola and he will be with Lamar next year. We got (Thomas) Reinholt at Panola still doing really well. Those kids have really stepped up. They are playing the highest level.”

The Aggies will take on Oklahoma in Omaha this week.