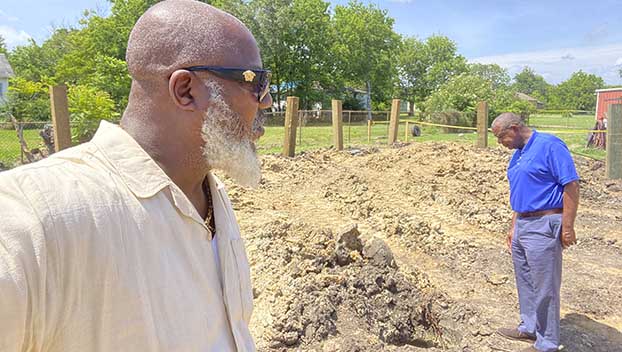 Hilton Kelley, left, meets with City Manager Ron Burton at a construction site on Lincoln Avenue where an oil-like substance was discovered under ground. (Courtesy photo)

The next step in removing an oil-like substance found underground during the construction of a Port Arthur residence is determining the entity on which the responsibility falls.

Community environmental activist Hilton Kelley said the substance, which smells and looks like oil, was recently discovered during construction of a Port Arthur home. The owner, who did not want to be interviewed but is working closely with Kelley, lives on Lincoln Avenue directly across from Lincoln Middle School. The current construction is part of a rebuild funded from the General Land Office following damage to his original residence from Hurricane Harvey.

Kelley said he reported the issue to the Environmental Protection Agency and the Texas Commission on Environmental Quality. The Texas Railroad Commission, which is responsible for pipeline leaks, has also been notified. However, officials are unsure from where the liquid originated. 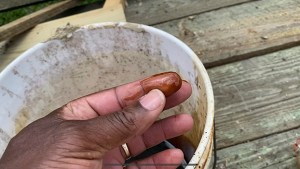 Hilton Kelley shows a sample of liquid found under ground during construction on a Lincoln Avenue residence. (Courtesy photo)

“This is a threat to that whole neighborhood,” Kelley said. “This stuff is very pungent, and if it spills out into the street and goes into the sewers, this is going to be a major problem.“

The liquid is visible at the bottom of five pier soil borings, halting construction. Kelley said another concern is the holes are large enough for children to fall into.

City Manager Ron Burton said in a written statement that the Port Arthur Fire Department responded to the scene to secure the area. The property is now surrounded by fire tape, and large mounds of sand have been added to help secure runoff water in the event of heavy rains.

“No immediate hazard to the local citizens has been identified,” Burton said. “State environmental regulatory officials are pursuing further investigation of this incident.”

Kelley met with Burton at the site Friday and said the city manager was very concerned about the situation, and interested in getting it rectified immediately.

The activist is currently working with the landowner to grant access for the EPA to survey the land.

“A serious assessment will be done,” Kelley said. “Everyone is being very careful.”

Those wanting more information can contact the Houston District Office of the Texas Railroad Commission at 713-869-5001 or the TCEQ Public Communication Office at 512-239-5000.