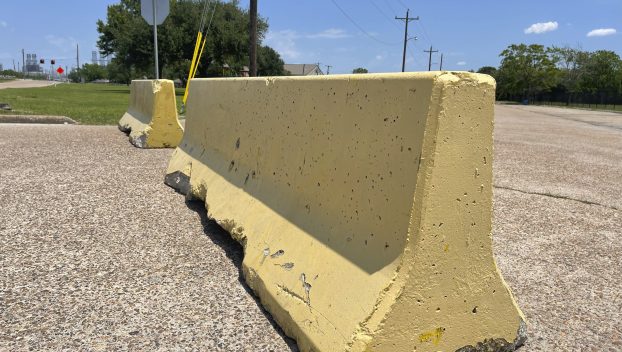 The City of Port Arthur has placed concrete barriers at the intersection of West 15th Street and Terminal Road to deter traffic from nearby refineries.

Councilman Kenneth Marks received a call from a resident on 15th Street concerning traffic from the nearby parking lots.

“They were actually exiting on 15th Street and going through a residential neighborhood, where we have two schools in the vicinity and children and residents walking along that way, which could be considered a safety hazard,” Marks said regarding contractors leaving work in the afternoon.

“I had, as well, received phone calls from constituents on West 17th Street because people were flying through that neighborhood, as well, and it endangered some children who were playing on the bicycles,” he said.

City Manager Ron Burton met with the public works director and assistant city manager at the site to discuss solutions.

The first — permanent concrete barriers — were delivered this week and have been installed.

“I know I’ve received several calls from individuals, and I even went and personally observed what was happening,” Mayor Thurman Bartie said. “And I want to say that the Gulfway Drive corridor that we met about the other day has a lot to do with those individuals going to 17th Street and 15th Street because they can’t drive as fast on Gulfway as they can on 17th or 15th.”

City Council on May 10 requested a representative from the Texas Department of Transportation to discuss the lack of progress on the Gulfway Drive construction project proposed last year.

A TxDOT representative said paving was the reason construction was halted on the 2.5-mile stretch from Woodworth Boulevard to Texas 82.

While Gulfway Drive is in the City of Port Arthur, it is also a state highway and not owned by the city.

Bartie said he’s asked every resident that’s called concerning traffic issues to come before council so their remarks can be put on record.

“We’ve come up with what may be a good solution,” he said regarding the barricades.

Burton said the city is monitoring the area to ensure vehicles do not begin on Gulfway Drive and cut over to a neighboring residential street in an effort to avoid construction and traffic.

In the event that becomes a problem, Burton said, additional measures will be taken.