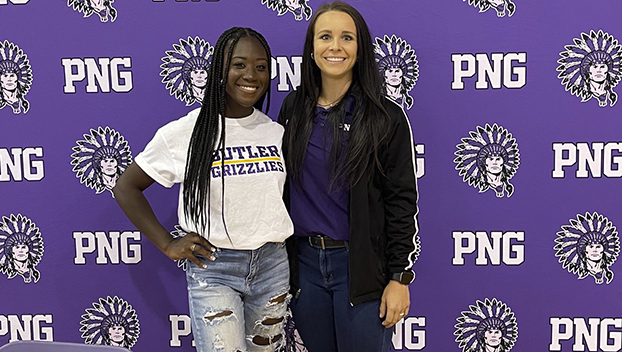 PORT NECHES — Port Neches-Groves student athlete JaKeyla McDaniel is continuing her softball career after signing with one of the nation’s top junior colleges.

McDaniel, who was a four-year varsity player, signed a letter of intent this week to play for Butler Community College in Kansas.

“I was very excited,” she said of the signing. “I have been waiting a very long time for that moment. When it finally, I was excited.”

Butler was the No. 6-ranked JUCO program last season.

“They are a really good team,” McDaniel said. “I really like the coaches. I feel like I will really get better there as a person and player.”

With a high school career filled with highlights, her first might be the most memorable. Her first at-bat as a freshman, McDaniel crushed the ball for her only career homerun.

“Being a freshman on varsity was very fun,” she said. “I played in the outfield and I hadn’t gotten an at-bat. I couldn’t believe it. It was my favorite pitch. It was inside. It was gone.”

After her freshman season, McDaniel changed her hitting style. She went from a right-handed batter to a left-handed slap hitter.

“Her speed makes her different,” PNG Head Coach Taylor Harvill said. “That is her greatest asset in the game. That transition (to a slap hitter) upped her game to another level. She was starting to slap the ball hard, too. “

Harvill said McDaniel was a great teammate, who led by example.

“She is a silent leader,” Harvill said. “She always uses her manners and respects what I say. She always bought in and gave 110 percent every day. She sets an example for the kids to follow.”

McDaniel said she will miss her teammates, most of whom will return next season, and will continue to root for them from Kansas.

“We really all grew up together,” she said. “We played select together, either on the same teams or against one another. I think we knew everyone’s time was coming to an end. This year was more special because we knew it was almost over. We were really good this season, too. It has been exciting. It is sad to leave them. They will keep it going.”