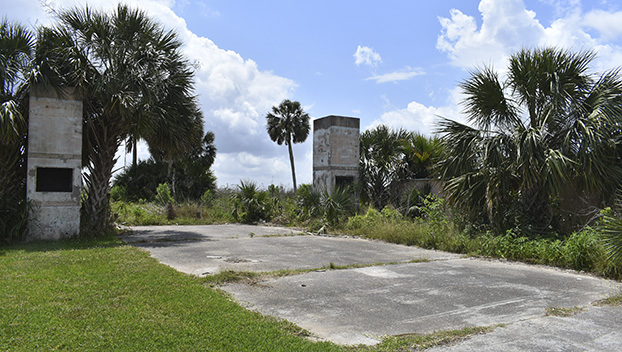 The site of the former Bahama Beach Club on Pleasure Island is included in the approximately 36 acres of land on the proposition. (Mary Meaux/The News)

As director, Davis has worked to make sure grass is cut and the island clean. He’s already looking forward to Memorial Day, when he knows many families will visit. And after the holiday there will be crews cleaning up again to be ready for the week.

For some residents, Pleasure Island is “out of sight, out of mind,” he said of those who don’t cross Martin Luther King Jr. Bridge to spend time on the 18.5 square-mile island.

He’s hoping to bring those people back and retain the visitors who already spend time there.

Earlier this month voters in the city approved the sale of a near 36-acre piece of land on Pleasure Island. Those votes were canvassed Tuesday. The next step is in the hands of the city’s legal department, which is exploring the process to sell the land.

Val Tizeno, city attorney, said the law requires a certified, licensed appraiser to set the Fair Market Value, because the land is considered a park.

Davis said this will be a learning experience since it is the first time land will be sold on the island.

The Pleasure Island director said there is interest in the property. One developer has been in contact since August, he said.

But this doesn’t mean the developer will be the one to purchase the land. There are other steps that must come first, including the appraisal.

But in the meantime, he’s pleased with the feedback he’s received.

Ronnie Moon, Pleasure Island advocate who has worked to keep North Levee Road clean, spoke to the city council recently, as did a representative of the Port Arthur Yacht Club, saying they were thankful for how the area looked.

Davis spoke of the moment when motorists cross the MLK Bridge and see the island. There’s an inside joke, he said, that you never go to Disneyland and find the grass not cut. For him, Pleasure Island is Disneyland.

“When you come over here, the grass is going to be cut,” he said.