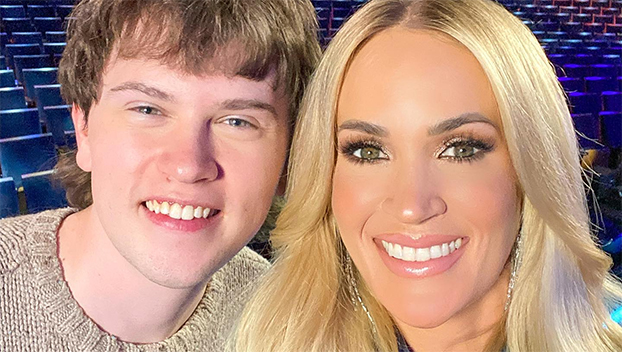 Fritz Hager took a photo with Carrie Underwood before performing one of her songs on ‘American Idol’ Sunday.

A Texas singer/songwriter with Southeast Texas ties will not be in next week’s “American Idol” finale, but he has no intentions on hanging up his guitar.

“I’ll be honest, ending it here is tough,” Fritz Hager posted online following Sunday night’s elimination,” but I am so incredibly grateful. For the friends. For the memories. This is not the end, it’s just page one.”

Hager, who lives in Tyler with a mother from Port Arthur and father from Beaumont, began his journey auditioning as one of 100,000 people.

His first performance in front of judges Katy Perry, Lionel Richie and Luke Bryan didn’t go as planned, with Bryan saying “no” about Fritz making it to the Hollywood round.

It was something the country singer quickly retracted during Sunday’s live show.

“I’m going to need the show to forever remove the clip of me telling you ‘no’ in audition,” the country singer said. “Obviously my coffee was off that morning. Wrong side of the bed. But anyway, man, love everything you’ve done. Everything.”

The comment came after Hager performed 5 Seconds of Summer’s “Youngblood,” shedding the signature guitar with which he always plays.

“Fritz, you had that up your sleeve this whole time?” Perry said. “Who are you? You look so cool. That was so cool. You’re so cool.”

It was his second performance of the night, the first being a twist on Carrie Underwood’s 2021 collaboration, “I want to remember.”

The five final contestants were present to see the show’s fourth winner perform at Resorts World Las Vegas. Underwood then served as their mentor for Sunday’s show, in which each sang one of her songs.

“When I found out that Carrie Underwood was going to be the mentor this week, I kind of freaked out a for a little bit because she is the gold standard for all that we’re trying to do,” Hager said on screen.

The two talked comfortably as he played his version of her song for her.

“It’s still just so crazy, the fact that I’m still here,” he told her.

“I convinced myself every week that I was going home,” she admitted.

And when he spoke of his nerves before performing, she all but reiterated Hager’s comments following the show by saying, “Welcome to the rest of your life.”

And she wasn’t the only one to do so.

“You guys are all incredibly talented,” he told the contestants after. “I know this is technically a contest, but that doesn’t mean you’re not all entitled to long, incredible careers. Just work hard and enjoy it.”

Hager’s talents were celebrated often throughout the night, particularly following his performance of Underwood’s song.

“This is something you can’t teach — you either have stage presence or you don’t,” Richie said. “In your case, you can stand still, and just a little smirk, and everybody feels good because we’re watching you. This is your career, my friend. Congratulations.”

PHOTOS — West Side building destroyed by fire in…