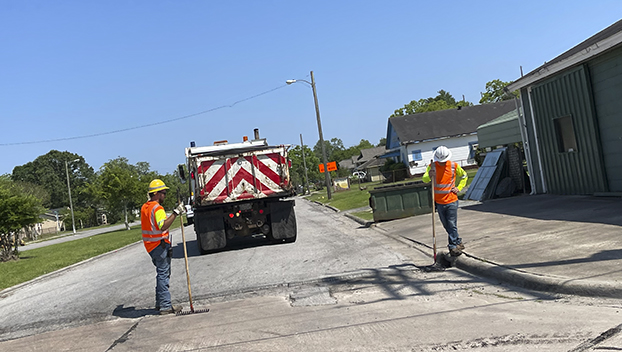 The Texas Department of Transportation was at work on Gulfway Drive Thursday, just two days after city leaders voiced extreme displeasure with progress on a construction project proposed last year.

Safety, in particular, was something Holmes stressed this week as a TxDOT representative appeared to update councilmembers on the stalled project.

“I’d like to ask…that in the next two to three weeks, someone from TxDOT address all of the safety issues on Gulfway Drive. Because that is certainly something that can be done,” Holmes said. “We may not be able to get the paving done, but we should not have safety issues in our community. We don’t deserve that.”

On Thursday crews were on site and new striping was visible in parts of the 2.5-mile stretch from Woodworth Boulevard to Texas 82.

Paving, TxDOT said Tuesday, was the reason construction had stopped.

The $3 million project was pitched to the city in January 2021, and said to be complete within one year.

That is the amount of time Councilman Thomas Kinlaw said has passed since he last saw crews on the roadway.

“My concern is…I wanted to make sure we have a definite,” he said. “We owe this to the citizens of Port Arthur — the timeline and expectation of this job. It’s taking a very long time.”

Councilwoman Charlotte Moses said she was recently driving down Gulfway Drive and was prompted to call the city manager to ask about the project.

Gulfway Drive is also Texas 87, which belongs to the state and not the city. However, Mayor Thurman Bartie said, residents heavily rely on it.

“I supported and embraced your presentation on this idea about a year ago, if I recall correctly, on how the work would progress,” he said. “It hasn’t. No one here, the city manager, nor myself have been informed that you all would not be able to do it in the manner in which you said you were going to do it.”

Agency representative Dave Collins said progress on the project stalled due to a particular type of mixture needed to pave the street.

“And it is very important because the mixture that we’re putting on this roadway is… a high-performance mixture to allow heavy traffic durability in time,” he said.

Collins said he would ensure any safety issues such as striping would be addressed immediately, but could not give an exact timeline on when the project would end.

He told council he would return with “dead hard” dates.