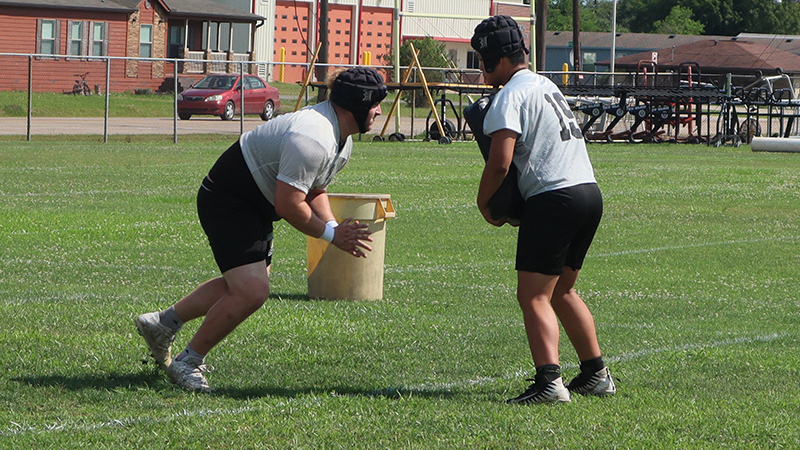 Offensive line is one of the most important units on any football team. Teams with more experience within the position group tend to be more successful. In the fall, Nederland will return two familiar faces in Jack Bieber and Colby Smith.

“I have thought about the team ever since last season ended,” Bieber said. “I have been thinking about the guys leaving and the guys coming in. These young guys haven’t been on varsity.”

Bieber said the unit will sometimes practice on their own after school to help build a bond as well as learn new techniques.

“We will sometimes meet up on the field on Fridays,” he said. “I try to do the little things and the extra stuff to help them out. I think it has helped a lot. We only have so much time before summer and two-a-days and stuff.”

He said the invitation extends to those outside of the lineman positions. 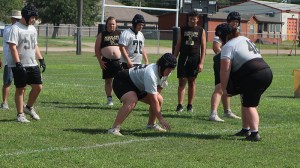 Bieber received a lot of support from teammates last season as a sophomore. He said he wants to pay that good fortune forward.

“I try to do the exact same thing for these guys,” he said. “I want to treat them the same way I was treated, if not better.”

Smith said he is also doing his part to make sure the unit gels.

“We have a lot of young guys,” he said. “We have to help as much as we can. They have never played at this level before.”

Head Coach Monte Barrow said the group has to be a cohesive unit.

“As young as we are going to be, having two guys coming back is huge,” he said. “The mindset of playing that position is totally different than playing any other position on the field. I think those guys know how important we feel the position is. They can stay in those young guys’ ears.”

Smith will move from guard to center in fall. The center position is often tasked with making sure the protect schemes are right and helping other linemen know their assignments.

“The communication for the line starts on the inside and works its way out,” Barrow said. “They know it is going to be on them to talk to the young guys… (The center) is making all kinds of calls. That sets up the protection and zone scheme on a given play. Also, you have to have a good snap or nothing else happens.”

Smith said snapping the ball sounds easy until another person is lined up across the line of scrimmage.

“Reading the defense and making a perfect snap every time can be hard,” Smith said laughing.