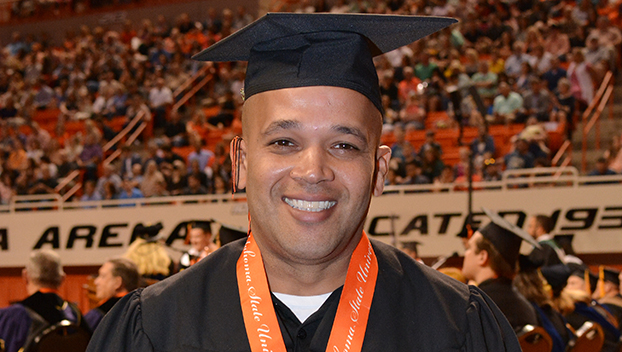 Derrick Freeman at his gradation from Oklahoma State University.(Courtesy photo)

When Derrick Freeman’s tenure as mayor of Port Arthur ended in 2019 he saw an opportunity to do something he had always wanted to do — complete his college degree.

And after years of juggling 15-21 hours of course work, Derrick, 46, proudly walked across the stage Saturday at Oklahoma State University with a Bachelor of Science in Business Administration and a major in marketing.

“There were a lot of long nights,” Derrick said, adding he made it through with the grace of God and his family’s understanding.

Derrick  enrolled in Lamar State College Orange not long after he left public office, hoping to complete something he started last century. LSCO helped organize his scattered credits and got him on a path to an Associate’s Degree in Business. After graduation he was accepted into Spears School of Business-Oklahoma State University. 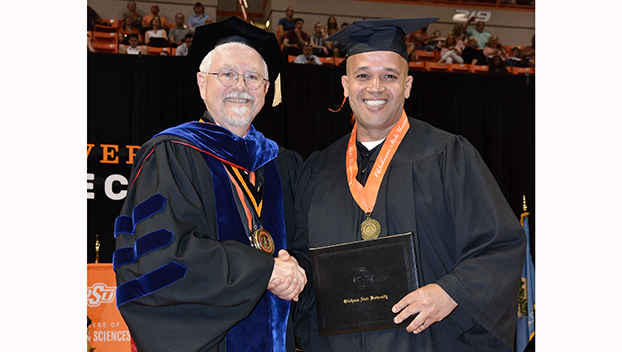 “They had the best program in business online for a marketing degree. I was grateful I got in,” he said.

And while he would never say LSCO courses were easier than Oklahoma State, those in Oklahoma were a bit more intense.

He finished with 21 hours.

Derrick is a realtor with Freeman Properties Group LLC, married and has four children. He comes from a close family.

Shannon Freeman, his wife, spoke on the obstacles he overcame — a pandemic, hurricanes, evacuations and a winter freeze.

As Derrick was taking his courses online, he had to explain the Southeast Texas-specific situations to professors in another state.

And before he could get his degree, his younger brother Marcus Freeman was murdered.

When Derrick started out on the educational journey, his youngest child was 3. Now his children are 6, 9, 11 and 13.

“This was a fun adventure, such an adventure, and when the family came to celebrate, I wouldn’t trade it,” Shannon said. “How proud my kids were of my husband was insurmountable.” 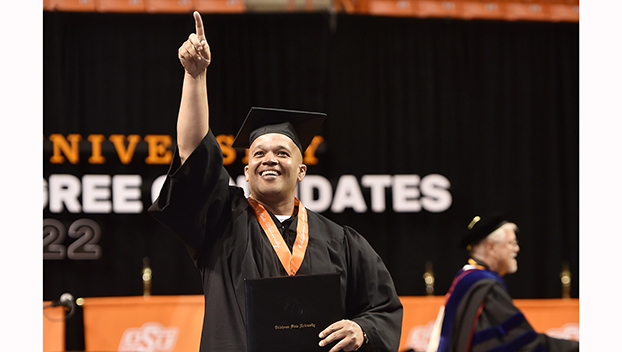 “It was a great Mother’s Day gift,” Deborah said. “I went with family to Oklahoma and watched him walk across the stage. It was a very proud moment in my life.”

The proud mom spoke of Derrick’s intelligence and how he understands multiple subjects simply from studying them on his own.

“I’m so proud of him. Through all the adversity that came along with Port Arthur politics, I think those people who didn’t do right by him pushed him to do right for himself,” she said.

Looking back, she feels God thought it was time for Derrick to move on, take care of his education and his family.

“I’m so proud of him and with the loss of my younger son, it was a great tragedy, God blessed me to see my older son move forward,” she said. “That’s how we talk about it in the family, move forward.”

The fact the graduation was held on Election Day also occurred to Derrick, who lost his bid for reelection in 2019.

“It wasn’t lost on me,” he said. “God has a sense of humor. I graduated on Election Day.”

For now he will take some time off and rest. He has a location opening in Central Mall soon and is mulling the idea of continuing his education.

He said it is awesome “being on this side of the table,” building the community from a different side though home ownership and creating wealth for residents.

“I’ve been enjoying it, having a good time,” he said. “It’s good to have a victory and good to see my family smiling again and being happy.”