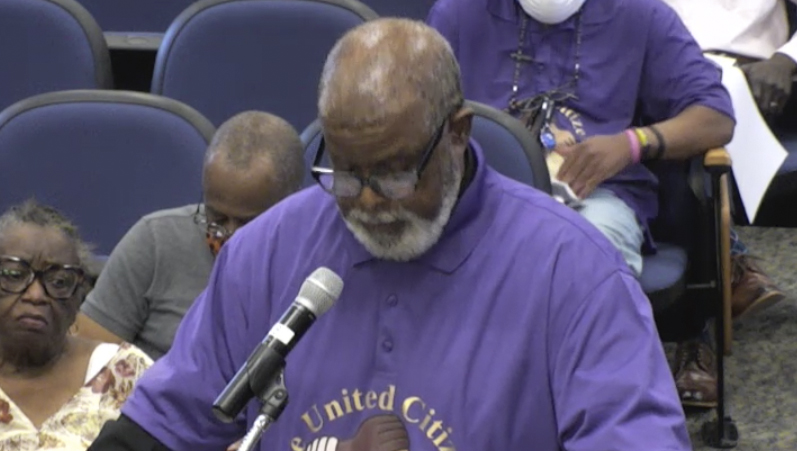 A Port Arthur group is asking council members to consider changing elections from majority to plurality, which would eliminate future runoffs.

By using the latter, candidates must receive 50 percent plus one of the vote. The former allows for the candidate with the highest percentage of votes to take office.

“The reason is after you have your regular election, you have to turn around and hold a runoff election,” Scraggs told Port Arthur Newsmedia. “That’s extra money spent unnecessarily. That’s one of the things we want to present to council and the mayor, to have them consider changing that to save the taxpayers some money.”

Group representative Hardner Williams spoke before council Tuesday evening. But he wasn’t the first to do so in the past few years.

“It’s not cost efficient,” he said. “The runoff is going to cost the taxpayers about $100,000 extra. We’re not gaining a whole lot. Why don’t we just put it on plurality and save the voters some money?”

While Port Arthur Newsmedia was not able to verify the proposed cost of a runoff election by press time, Lewis was not the only former councilman to speak on the additional funding needed under the current voting method.

John Beard, who served on council from 2003-2012, said cost-saving issues were made when the city consolidated the number of polling places for early voting and Election Day. However, he said, that could limit access to some voters that have to travel to vote.

In Saturday’s election for mayor, 33,026 residents were eligible to vote, whereas the number of those who did was 3,167. The number of registered voters for the Port Arthur Independent School District was 34,623. Of those 3,111 cast a vote.

“If (residents) make a recommendation and it comes from the committee, council should take that under advisement by putting that ballot item up,” Beard said.

Williams’ told councilmembers Tuesday that the purpose of their operation is to support fairness and cost effectiveness in the City of Port Arthur.

“Our main focus on this evening…is to draw attention to an issue we believe is not cost effective,” he said. “From 1998 to 2008, polarity voting cost the citizens of Port Arthur $449,990. In the same 10 year span from 2008 to 2018 under the system that we’re presently under cost the city $1,112,433 due to runoff elections. These monetary figures were obtained from the City of Port Arthur records, and they are public records, as well.”

City Attorney Valecia Tizeno said the city charter was amended in 2020 to bring councilmembers to three-year terms that stagger. The Texas Constitution, she added, requires terms of three or more years to be done through majority voting.

“I agree with you, I was in a runoff and I didn’t like it,” said Councilwoman Charlotte Moses. “I had a majority of the vote every time.”

Moses and Tizeno discussed the voting process prior to the charter change, and made mention that two-year terms require more elections. The charter can be amended in 2023, Tizeno said.

“The council here can’t do anything,” Moses said. “The citizens have to vote on that.”

Councilmen Kenneth Marks and Thomas Kinlaw have served as members of the Charter Change Committee.

“That issue did come up and we voted on it, and I just want, for transparency sake, to let everyone know how I voted and why I voted the way I did. I voted for a majority, because in some instances when you have four or five candidates, the top vote getter will get less than 30 percent of the vote. And that person will then be the representative of that district.”

“I whole-heartedly support your group,” said Councilman Cal Jones. “I wouldn’t mind losing a year on council if I could save the city money and the citizens money.”