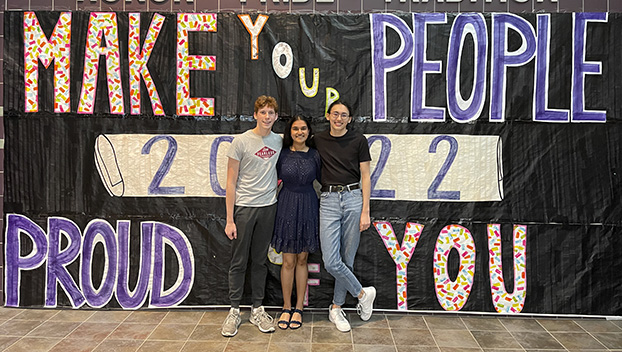 PORT NECHES — Sai Gelivi, Kaden Allen and Cyrus Bronson have been competing against each other for years — so much so, they tied for valedictorian.

And while the final decision was made by a thorough review of every student’s high school grades, being first in the 2022 Port Neches-Groves High School graduating class remains an honor shared among them.

“It started freshman year,” Bronson said. “I mean I love school, I studied hard, I did my own thing. I think what started it was probably in February they sent us a letter, and I saw “first” on my paper.

“It was a small group of about eight or nine of us, and ever since then it was a competition. We’re all still friends. Sophomore year we doubled up…not trying to outdo each other, but outdo each other. It started to dwindle when we started competing more.”

And even after the tie was broken, they continued to do so in a friendly way while speaking with Port Arthur Newsmedia.

“Personally my hardest class throughout my high school career has been physics, Gelivi said. ”I think I kept an A-plus in every single class except physics. It’s still a good grade, but it’s just scary. That class challenges me to the extreme.”

Allen made the group laugh by following her statement with, “I’m doing great. I took physics last year. I’m just cruising through this year.” 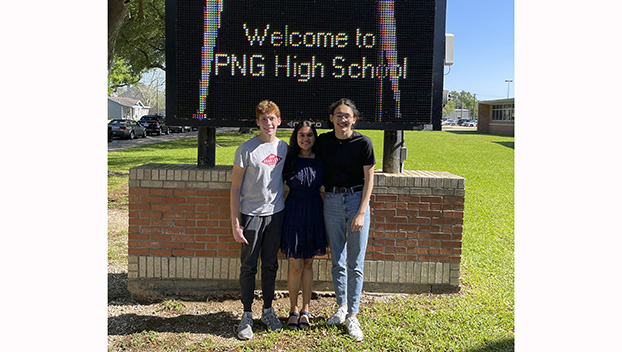 From left: Cyrus Bronson will be attending Louisiana State University. Sai Gelivi and Kaden Allen will both be at University of Texas at Austin.

Following graduation May 25, Allen and Gelivi will leave for the University of Texas at Austin, while Bronson will be attending Louisiana State University.

All three will be ultimately enter the medical field.

“I want to become a doctor and specialize in endocrinology,” said Gelivi, who plans to major in biochemistry. “I think we could use more of them.”

Bronson will also be studying biochemistry, and Allen’s ultimate goal is to be a neurosurgeon.

Two of the three will be in school together with other peers, but one will be in a new town.

“I’m excited to go,” Bronson said. “I don’t really have anyone in Baton Rouge. My girlfriend goes to school there, so I know her. Other than that, I’m starting out fresh. I don’t have any roots over there. So I am happy that it is only 3.5 hours from home. I will definitely be driving home on the weekends sometimes.”

However, the senior has gotten a head start on making new friends through social media.

“A lot of the time you go on Instagram pages, they have Instagram pages for your school where you can post yourself, people will comment and you can establish a friend group through there,” Bronson said. “It’s just finding people with the same interests. I like to surf, so I’ve made a few friends like one who lives in Virginia and loves surfing, as well. Me and him started off, then I found my roommate. We three made a group chat, picked up a few more people from somewhere and now we have a friend group.”

Although all three expressed sadness for not being able to see each other and their current peers as much.

“Since fifth grade, we’ve been in the same aligned classes, so we’ve all been taking (advanced placement) classes and advanced classes as long as we remember,” Gelivi said. “Getting out of that group will be a whole new atmosphere.”

Allen said the people is what he’ll miss most about high school.

“We’re probably not going to see each other often, realistically,” he explained. “I’ve gotten so used to seeing the same people for the past eight years. Literally since middle school I’ve seen the same people every day, so it’ll be a real change for sure.”

Gelivi has realized how often children need their parents.

“I feel like in college we’re going to realize we took them for granted, and we’re going to have to figure out everything by ourselves,” she said. “It’s going to be a new environment we’ll have to work hard through.”

All schools determine a valedictorian, as they’re required by the state to submit that student’s information for financial aid opportunities. However, prior to 2018, the district only publically recognized the top two percent.

The district’s board policy on breaking a tie reads, “In case of a tie for recognition as valedictorian and salutatorian in weighted GPAs after calculation to the second decimal place, the District shall calculate an unweighted numerical grade average using grades earned in all eligible courses taken by each student involved in the tie.

If the tie is not broken after applying these methods, the District shall recognize all students involved in the tie as sharing the honor and title.”

Gelivi has been named this year’s valedictorian.

ON THE MENU — Lamar State shows off culinary…