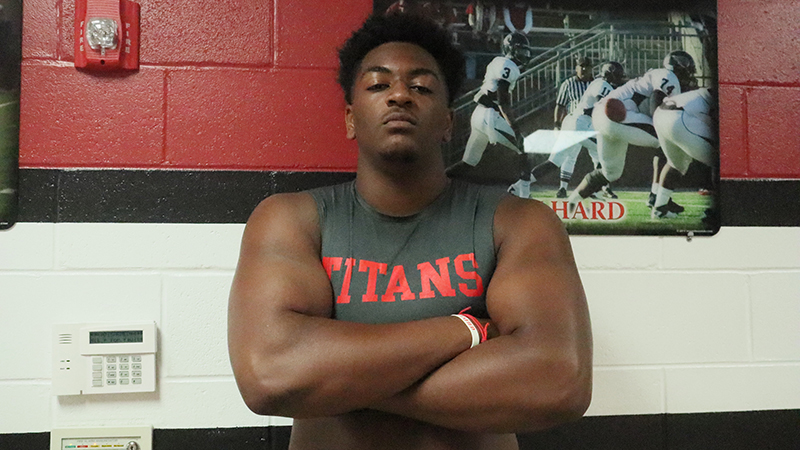 Memorial tackle Cayden Bowie said he is fully recovered after tearing his ACL in the fall. (Chris Moore/The News)

Nine months after tearing his ACL in a game against Barbers Hill, Memorial left tackle Cayden Bowie is back to full strength and ready to help lead the Titans into the summer program.

When the injury happened, Bowie said he felt his season was over.

“I went down screaming in pain,” he said. “I went to the sideline, and my first thought was that I hoped it wasn’t my ACL. The trainer from the hospital did the test on it and said that it was most likely torn. I cried for about 10 minutes and then got back to cheering for my teammates.”

“The doctors told me they will get me back on track and that I would recover and be OK,” he said.

Just 25 years ago, ACL tears were potential career-ending injuries. Now it is common to see athletes recover from surgery well within a year. For teens, the recovery time is often less.

“The good thing is that he is 16 years old,” Memorial Head Coach Brian Morgan said. “Now the recovery process is a lot shorter then it was. They have gotten so advanced with how they do that, and he is so young. He is also a mentally strong kid and his work ethic is off the charts.”

Bowie was walking a week after surgery. In about four months, he was moving a little faster and stepping up. Six months after surgery, he was running and doing drills. He was fully cleared in April for track, weightlifting and football drills.

Prior to the injury, Bowie was one of the most highly recruited linemen in the area. That didn’t change as he continued to visit college campuses and receive offers from Division I programs.

“That has been a blessing,” he said. “For them to have an athlete that tore his ACL and has been down for a while, they have still been recruiting me heavily.”

Bowie is on pace to graduate from Memorial in December and enroll in the college of his choosing for the following spring semester. While he has received approximately nine offers, Bowie said his top three schools are the University of Houston, University of Central Florida and Texas Christian University. He said he has been to the Houston campus multiple times and plans to visit TCU and UCF during the summer.

Morgan said Bowie has continued to do well balancing the recruiting process and his obligation to the team.

“He begged me all spring to have spring practice so he could get back to playing football,” Morgan said. “…His mom has done a really good job raising him and really keeps him grounded. He knows his priorities. Yes, he is going to be a big-time college football player and be a really good one. At the same time, those core family values have been taught to him well. Academically he is really strong.”

Bowie said he would like to make his college selection in July.