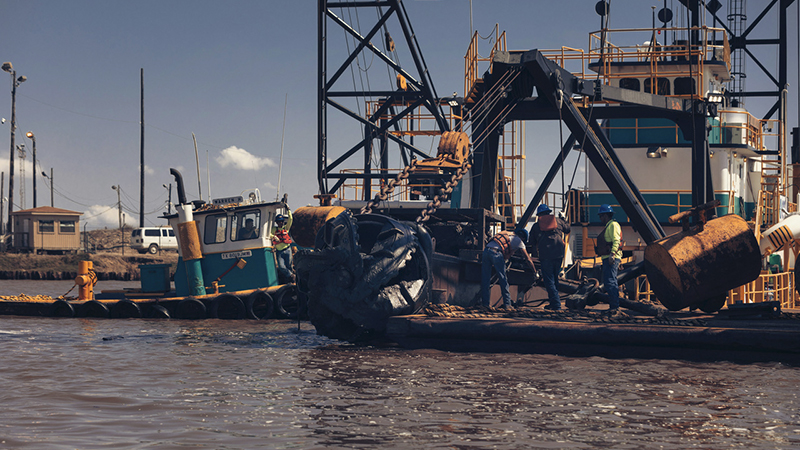 The Sabine-Neches Navigation District is reaching out to the public ahead of Saturday’s election to explain the meaning of Proposition A.

“When you read the ballot language, the first sentence in the paragraph is pretty clear,” said Deputy Director Matthew Kaufman. “Then you’ve got the second sentence, which is all the legal stuff the attorney general’s office requires you to put on the ballot. We want to make sure people, whichever way they vote, are voting based on a correct understanding of what Proposition A is all about.”

The proposition relates to the ongoing efforts to deepen the Sabine-Neches Waterway.

The project, which is a joint partnership between the Navigation District and the Army Corps of Engineers, was authorized in 2014 and funded for construction in 2019.

The Corps of Engineers is constructing 60 percent of the project with the Navigation District constructing the other 40 percent.

The Corps has received $100 million in federal funding and are starting construction on the project that will deepen the waterway from 40 feet to 48 feet.

Currently, the Navigation District is allocated nine cents in tax revenue with six of those nine going to the waterway project.

“That six cents brings in about $12 million a year, and that’s been effective up until now,” Kaufman said. “Now that we’re moving to the full-fledged construction of it, it’s a billion-dollar project. Twelve million a year doesn’t get you very far down the road when you’ve got about a $400 million duty to maintain our share of the cost.”

If passed, Proposition A will allow the Navigation District to borrow additional funds.

“First and foremost, it’s not a new tax or an increase in tax,” Kaufman said. “It’s taking advantage of the taxes that we’re already collecting and giving us another tool in our toolkit by way of letting us use those revenues to go out and procure a loan.”

With proposition approval, the project could be finished within six years, he added.

The Sabine-Neches Waterway is the largest exporter of crude oil and liquefied natural gas in the nation, according to information from district.

Deepening the water could add as many as 336,000 new permanent jobs and $6 billion in state taxes.