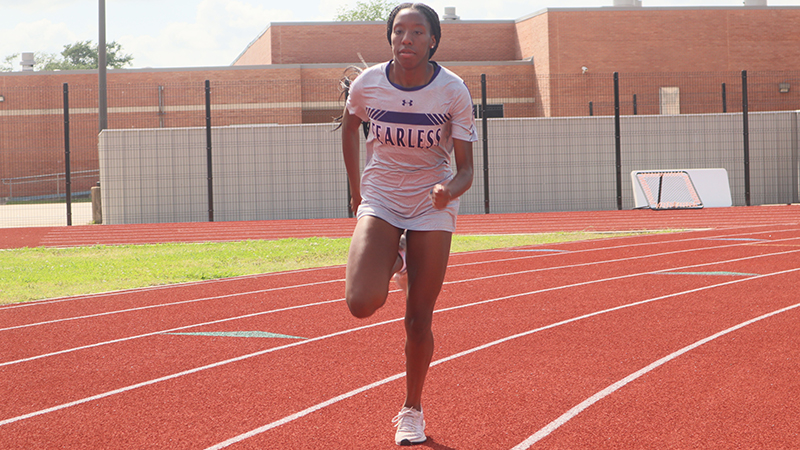 PNG's Sanaria Butler runs on the track in preparation for the state meet. (Chris Moore/The News)

The goal is not to put unneeded pressure on their own athletes by seeing how they measure up. In preparation for the state meet, Girls Track Coach Jessi Farmer told senior Sanaria Butler they were only going to look at the competition’s stats one time and then not worry about it anymore.

Butler responded with the name of the only person to record a faster time than her, because she had been checking opposing student-athlete stats frequently during the season.

“I don’t really look at it now because I know everybody,” Butler said.

Butler said she was excited when she came in second in her first event, punching her ticket to Austin for the state meet.

“I came in the second in the triple jump and almost came in first,” she said. “It was close.”

Butler came in first place in the 400m dash at the regional meet with a time of 54.09, putting her more than a second in front of the competition.

She finished second in the long jump and triple jump with distances of 19-03.75 and 40-04, respectively.

When not on the track or in school, Butler said she is sleeping. To get in the zone for a meet, Butler listens to No Hands by Waka Flocka Flame and prays.

“She works so hard,” Farmer said. “All summer she was reaching out to me, telling me what she ran. She is always putting in the work. For her to get here, and I know this is the biggest dream of hers, I am just really, really proud of her.”

A student-athlete is lucky to make the state meet in one event, let alone three.

“You have to focus on so many different things,” Farmer said. “You can’t just focus on one thing. To be able to get better at that and do that much is just awesome.”

The state meet is May 12-14, but the 5A competitions will take place May 13 at the University of Texas in Austin.