Chamber brings experts, public together to discuss management of CO2 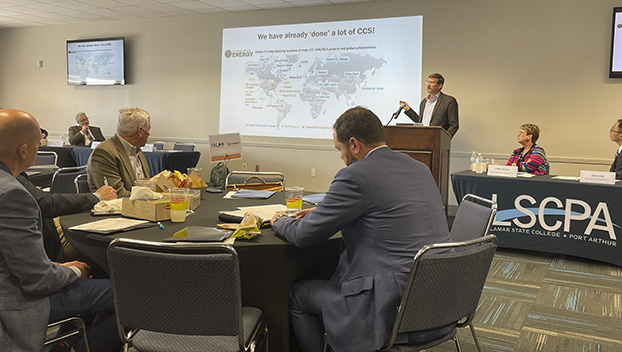 Tip Meckel with the Bureau of Economic Geology speaks at the CO2 Summit Tuesday at the Carl A. Parker Multipurpose Center. (Monique Batson/The News)

A multitude of experts, community leaders and interested residents gathered Wednesday at the Carl A. Parker Multipurpose Center for the CO2 Summit.

The event was hosted by the Greater Port Arthur Chamber of Commerce to discuss management of carbon dioxide, 45FQ tax credits related to CO2 capture, utilization and subsurface storage including enhanced oil recovery, according to the department.

“Carbon Dioxide/CO­2 capture, storage and sequestration are important to the world’s future,” said Pat Avery, Chamber president and CEO. “I applaud both academia and industry for the research, new equipment designs and process changes to alleviate this important environmental issue.”

The luncheon and lecture series is reoccurring. 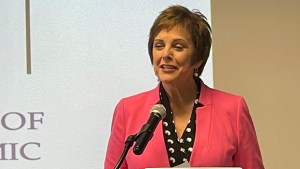 “It’s good to see a lot of familiar faces but also a lot of new faces,” said Tip Meckel, a senior research scientist for the Bureau of Economic Geology at the University of Texas at Austin. “I think the last time we did this…was about four years ago, and it’s grown a lot sense. And I think that’s really an indication of more interest in the topic in general, and maybe even specifically for individual companies. But also kind of a growing urgency to actually act.”

Meckel operates the only academic high-resolution marine 3D seismic system in the United States and has deployed the system three times for carbon capture in the Gulf of Mexico, according to his biography.

He was one of several speakers that included Rick Johnson of Entergy, Preston Kurtz of Air Products and R.J. Demahy of Theobald Demahy and Co.

“We’re going to hear from different speakers on different aspects, so we’ll hear a little bit about the way the local university is engaged,” Meckel told the crowd. “But we’ve got also a lot of active project development in the area, so that’s new from four years ago. We’re also going to hear a little bit about the amendments that have been made to the tax cuts that support the carbon storage side of these projects.”

Avery spoke on the importance of bringing such presentations to the public.

“The Greater Port Arthur Chamber of Commerce wanted to be on the cutting edge by leading this discussion and becoming knowledgeable regarding these rapid and dynamic changes in business,” she said.