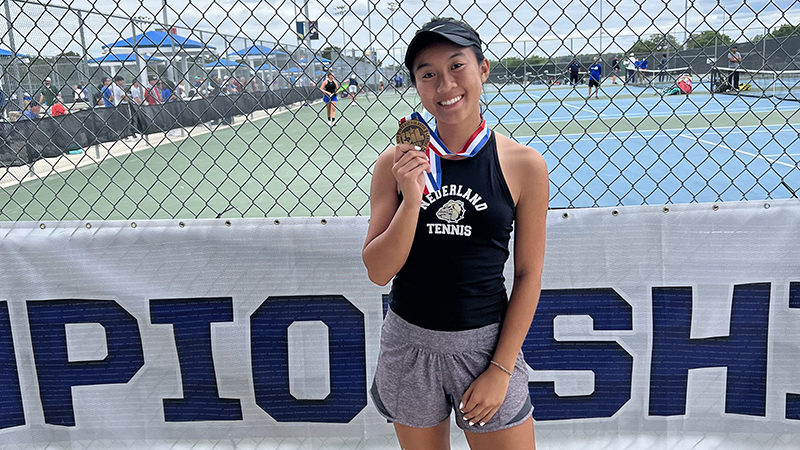 Nederland senior tennis player Megan Do concluded her illustrious career for the Bulldogs this week with another appearance in the UIL state tournament.

Do walked away with third place, losing to the eventual state champion in the second round.

The senior made it to the state tournament three times for Nederland. The only year she did not go to state was in 2020, due to the pandemic.

Do said she while she is disappointed by not winning state, she is happy with her high school career.

“I didn’t get as far as I wanted to but I am proud of what I accomplished so far,” Do said. “I am very glad I had the opportunity to play for Nederland after moving from Houston. I am glad I was able to play for Coach Lopez was my coach for all four years. I learned a lot from him during my time.” 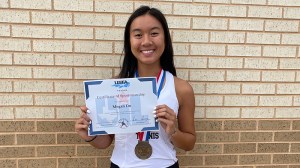 Do said she will remember her teammates most.

“I enjoyed when all of my teammates were with me,” she said. “I really had fun in the regional round this year and last year. Those were my greatest accomplishments along with going to the state finals last year.”

Nederland Tennis Coach Jorge Lopez said he is proud of what Do accomplished.

“Her impact on the program has been amazing,” he said. “She has been a team leader and was a team captain the past two years. She has left the mark very high.”

Earlier this year, Do signed a letter of intent to play tennis for Lamar University.

“I think the kids look up to her,” Lopez said of Do. “That is not just in Nederland, but everywhere we go. All the kids from Friendswood like her. It is like she has fans everywhere. Everyone was pulling for her, but it just didn’t work.”

Lopez said Do was more upset than he had ever seen her after the loss.

The Bulldog won the first set 6-3 and was up 3-0 in the second before fatigue kicked in, Lopez said.

“I think she felt like she can do,” he said. “But tennis is like that. Her accomplishments have been great. She had done so may good things throughout the years and this is just another chapter of her life. Maybe not winning was something good because it might show her what she needs to work on.”

Lopez said he believes Do will only get better.

“Her fitness level wasn’t there and I think she finally understood,” he said. “She would say it was her nerves or cramps. This time, there were really no cramps. We do fitness but we don’t do it for a level that is that high. That is really more of a college level fitness she needs to build.”

Do said she is looking forward to playing for Lamar University.

“I am ready to meet all of my new teammates and have a new family,” she said.