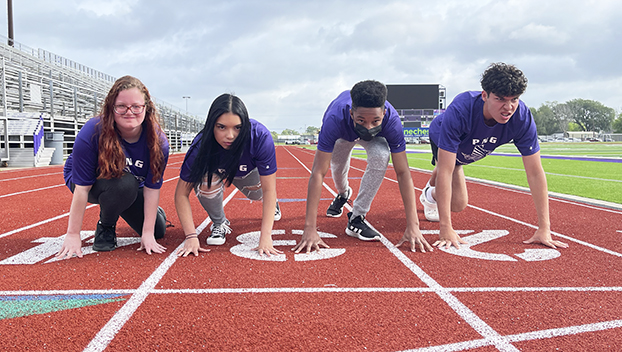 From left: Colby Babb, Mariela Dublon, Jaden Hoffpauir and Chase Fontenot are part of the Port Neches-Groves High Unified Track team, which is headed this week to the state competition in San Antonio. (Monique Batson/The News)

PORT NECHES — If the competition were based off personality alone, the Port Neches-Groves High School Unified Track Team would be coming back from San Antonio this week as state champions.

And they’re certainly going in with confidence.

“I’m really excited about seeing how far we can go,” said Mariela Dublon, who participates in the 4×100 relay. “We’ve already gotten first before state, which is way better than we got last year. So I think we can succeed way more than we did last year at state.” 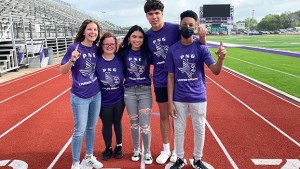 Her teammate, Chase Fontenot, knocked that confidence up a notch.

“I practice by getting here at 4:30 in the morning every day,” he said last week. “I rake the sand. It’s just blood, sweat and tears from that point.”

The giggles from his teammates made it clear the athlete was joking.

“But he does rake the sand in practice sometimes,” Coach Lauren Hanratty said.

After being named Regional Champions April 19, the PNGHS Unified Track team has been preparing for Wednesday’s competition.

“We’re doubling up,” Fontenot said to more laughter. “Three o’clock in the morning now. Hopefully we’ll get some premium sand — order that online. Maximum performance at practice. Everyone’s running double. We’re expecting nothing else but first place at the state meet. Quote me on that one.”

But through the jokes, this team is taking every moment seriously.

Today they’ll begin their journey with a school-wide pep rally.

“For me as a teacher, it’s so special and makes my job so easy that I have the support from all the principals on campus, the superintendent, deputy superintendent,” Hanratty said. “It just feels good that the whole community and the whole school is backing us.”

Students will walk through the halls with the Indian Spirit and be greeted by every class in school, with most of the students holding signs and calling out congratulations. The Indianettes, cheerleaders, band, twirlers and others perform as the team makes its way through the school.

From there, they’ll load up and head to San Antonio. The competition begins at 10 a.m. Wednesday.

“It feels good to be with friends,” said Jaden Hoffpauir. “We support each other, love each other and talk to each other. In basketball we made it so far, and we’re making it far in track right now. And we’re having a good time doing sports and chillin’ with friends.”

Off the track, the teammates hit the books hard to stay on top of grades for participation in their U.I.L. sports.

“I love Special Olympics, if that’s a subject,” Fontenot said, adding he enjoys learning about history.

But it’s more than just power and performance for the Unified Track team.

“It’s made an impact on my life,” Babb said. “I have more friends. We had more people coming into Special Olympics, so I’m grateful for our sport.”

Dublon, who joined last year during track, echoed those statements.

“I saw the friendships I was making and the impact that I was making on other people’s lives. I love seeing the happiness on their faces, and knowing I was actually doing more than I’ve been doing in school,” she said. “It’s an organization I never thought I’d be in, but I love it. I love being here. It’s usually something that is hard for people to understand. But once you’re in it, you learn the kids and you learn to know how each one of them act. It’s a really amazing experience to see what everyone can do and what everybody is capable of.”