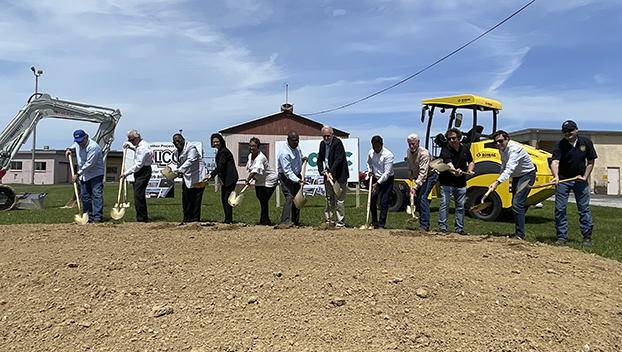 The existing facility at 6300 Procter Street will be expanded and improved through the next five years with designs by engineering firms Arceneaux Wilson & Cole and Freese and Nichols, and work by Allco Construction. 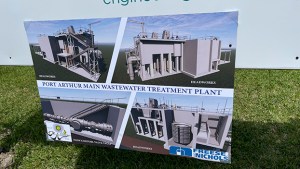 A rendering of the upgrades. (Monique Batson/The News)

“It’s difficult these days to get contractors that want to commit to a project that far out because of material prices alone fluctuating on a daily basis,” said Hani Tohme, who consults for the city. “We got lucky with a local contractor very well known in the area.”

City council in April 2020 voted to sell $60.56 million in certificates of obligation to renovate the facility. The bonds were purchased by the Texas Water Development Board, which then gave the city a reduced interest rate of $6.46 million.

TWDB member Kathleen Jackson was present for Tuesday’s groundbreaking, and presented a certificate of congratulations to city leaders.

“It’s so important we treat the water we use every day,” she told the crowd. 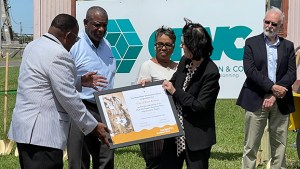 Currently the city has three wastewater treatment plants — the one on Proctor Street, one of FM 365 in Port Acres and one in Sabine Pass.

The Proctor Street location services a majority of the city.

“As the city of Port Arthur continues to expand, both in terms of rooftops and in terms of businesses, we need to continue to focus on improving our infrastructure,” said City Manager Ron Burton. “This water treatment plant is a major part of the city’s infrastructure that needed to be upgraded.”

“I’m really thankful that we’re at the point and place where we can see the fruit of our labor,” she said. “My heart is full.”

Moses toured the existing facility less than two years ago and said, after seeing what was needed, she began to pray.

“God can do all things, and we can see right now that this is what he wanted Port Arthur to have,” she said.

Joining council members, city staff and the TWDB were representatives from the Texas Commission on Environmental Quality, the engineering firms, the construction company and the offices of Sen. Brandon Creighton and Rep. Dade Phelan.

“She was a ray of light.” Beaumont officer reflects…