Nederland High School to present ‘The Addams Family, The Musical’ 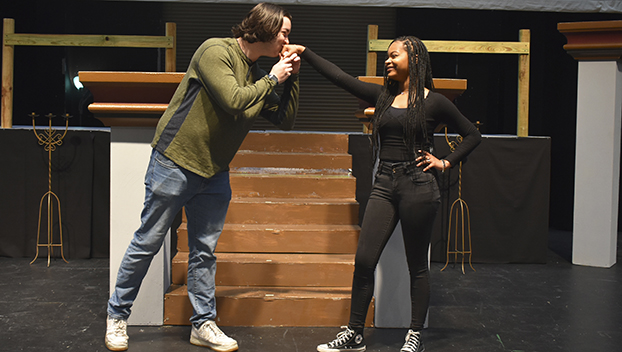 NEDERLAND — The Addams Family and all their quirks will be on full display, complete with singing and dancing courtesy of the Nederland High School Fine Arts Department.

The suave and bold Gomez is played by senior Thomas Doyle, while the role of the confident and spirited Morticia portrayed by senior Hayli Phillips.

Director Roxane Gray said the show is based on “The Addams Family” television series of the 1960s that introduced the characters of Gomez, Morticia and the family.

“(It’s about) Wednesday, their daughter, who is planning to get married to a very normal, conservative boy and the problems that ensue when they come to meet the parents. It’s quite an interesting adventure,” Gray said.

Then there’s Pugsley, who feels like he’s losing his big sister because she tortures him all the time, and he’s afraid she won’t do so one she’s married and gone.

Morticia and Gomez come to an impasse in their relationship in their concerns for Wednesday, but in the end love triumphs, Gray said.

According to Gray, the “The Addams Family” is a wonderful musical with interesting visual aesthetics. The crew will show the Addams’ home and the family cemetery.

Capturing the essence of Gomez and Morticia Addams was a task the two lead actors worked on. 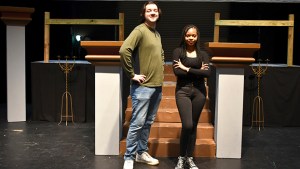 “Morticia is like a vixen, so I have to get in this really confident air of myself that I don’t access a lot,” Phillips said. “To prepare I made Pinterest boards with a bunch of pictures of her, looking at her outfits. Even the way she stands and walks is very particular.”

Besides her walk and the way she stands, Morticia also crosses her arms many times — something Phillips also studied.

Doyle said his dad was obsessed with “The Addams Family” television series, so when they learned the student would portray Gomez, his dad pulled up the old episodes and watched as many as they could.

The production brings the Addams group to the stage with Ethan Holder playing Uncle Fester, Synia Thomas as Wednesday, Greyson Bishop as Pugsley Addams, Emily Fontenot as Grandma and Landin Doucet as Lurch.

The creepy yet funny show is a bit different than other musicals.

“I’d say it’s definitely not the average-type musical with regular scenes and singing and dancing and box steps and kick lines,” Phillips said. “There’s a little of that but it’s a really funny show. I’ve never been in a show that’s this funny. I think people will have a good laugh if they come see it.”

Doyle said people who come out and see the show will see a lot of talented singers and talented actors.

Besides the student actors, Gray noted others who make the production possible. Lauren Truss-Hall is technical director/designer and is responsible for the sets on stage, lighting and more. Lance Orta is the music director, and Alexis Smith is the choreographer/director/staging. Christine Couron Martin is the choir director.

“The Addams Family, The Musical” hits the stage April 11 and 12 at the Performing Arts Center. Doors open at 6 p.m. and the show starts at 7 p.m. Admission is free.