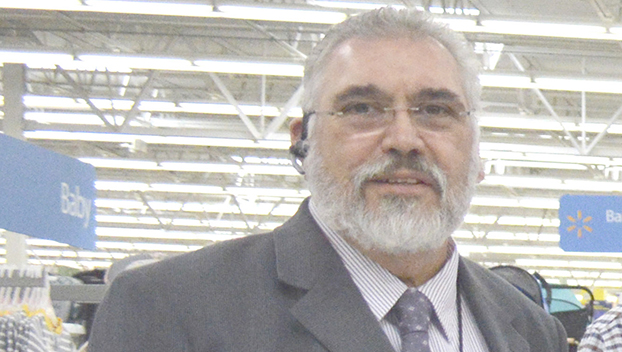 Jose Martinez is pictured at a Rotary Club of Port Arthur event in 2017. (Mary Meaux/The News)

It wasn’t until she read Jose Martinez’ obituary that Libby Arnold even knew how much he had accomplished in his life.

The director of Community Care-Prayer Outreach had known Martinez through the Rotary Club of Port Arthur before he returned to his hometown of San Antonio.

But boasting wasn’t something the former director of the Port Arthur Public Library was known to do.

“He was a very kind person,” Arnold said. “He was the type of person that didn’t have to be the brightest light in the room. He didn’t want to take away from other people.”

When Martinez’ sister called Arnold Wednesday with news of his death, she was shocked.

“When he was here, he was never sick,” she said.

While the nature of his death is not known, Arnold said he had been feeling bad and went to the doctor. From there he was put on hospice care, and died two weeks later on March 19. He was 67.

“He was always doing stuff like that,” she said. “He was quiet, he was kind and he was really smart.”

She said the two shared a mutual investment in the opening of Bob Hope School and the educational opportunities it would bring Hispanic students so they could pursue a college degree.

Martinez served on the Bob Hope School board. According to his obituary, he also served with the Kiwanis Club, Communities in Schools Southeast Texas, the Salvation Army, the Texas Library Association, the Knights of Columbus, the Guadalupano Society of Our Lady of Guadalupe Catholic Church and was a recipient of the 2013 M.L.K. support group award for community service.