Jones won the competition at the 6’2” mark but decided to keep raising the bar to see how high he could get. Before the event ended, Jones cleared 6’9,” beating the previous record of 6’6,” which was set last year. 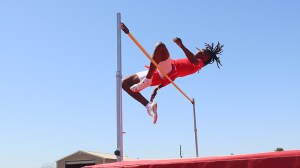 Last season, Maleek Jones, earned fourth place at the state competition with a jump of 6’4.” If Ke’Andre can at least maintain his school record, he is likely to medal in Austin.

The Titans will compete at C.L. Hanna Gator Relays at Dickinson High School today. The next competition will be the district meet April 13-14 at Barbers Hill.