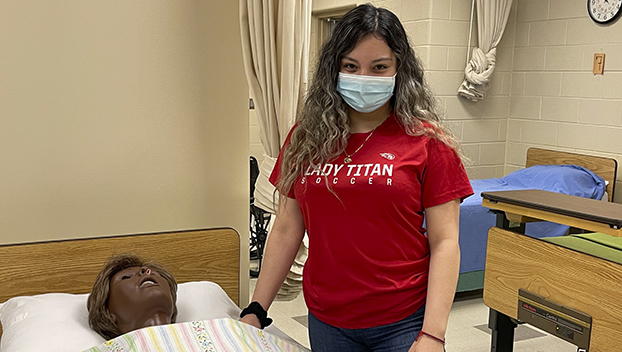 Maria Ortiz, 18, is a student at Memorial High School who is dual-enrolled to be a certified nurse aid by graduation. (Monique Batson/The News)

Maria Ortiz was on her lunch break at La Vaquita Meat Market Feb. 10 when she heard commotion outside the break room.

“Everyone was running inside the store,” the Memorial High School senior said. “I came out to see what was going on and was told people had been shot.”

It was at 4:13 p.m. when two students from Thomas Jefferson Middle School were shot in the parking lot of a shopping center across the street — a strip of businesses predominately occupied by La Vaquita.

According to information from the Port Arthur Police Department, the shooting took place following a verbal altercation between two teens.

Jose Cortez, 17, was arrested later that day and charged with two counts of aggravated assault. Cortez, officials with the Port Arthur Independent School District said, is not a student of PAISD, and he was not one of the people involved in the fight.

But one of the injured students who had been shot in the foot was carried into the meat market.

And that’s where Ortiz, who is enrolled in the Certified Nurse Aid class at the Career and Technology Education Center, went from grocery store employee to first responder. 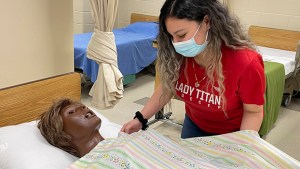 Ortiz ran to the first-aid kit and grabbed latex gloves.

“It came to my mind real quick: applying pressure will stop the bleeding,” she recalled. “I talked to him and said, ‘It’s going to hurt, but breathe in and breathe out.’ I was kind of panicking too. But if I’m going to keep him calm, I’ve got to stay calm.”

CATE Principal Kevin Johnson appreciates everything Ortiz has done for the community.

Ortiz said it was the first time she’s been forced to use her training outside of the classroom.

And she’ll get more training beginning this fall at Lamar University, when she begins studying to be a registered nurse.

Students at the CATE center are dual-enrolled in Memorial High School and Lamar State College Port Arthur, and graduate with a certification in the occupation of their choice. Ortiz will leave high school as a certified nurse aid.

Following her time at Lamar, the Port Arthur native plans to travel some and work in the area she was raised.