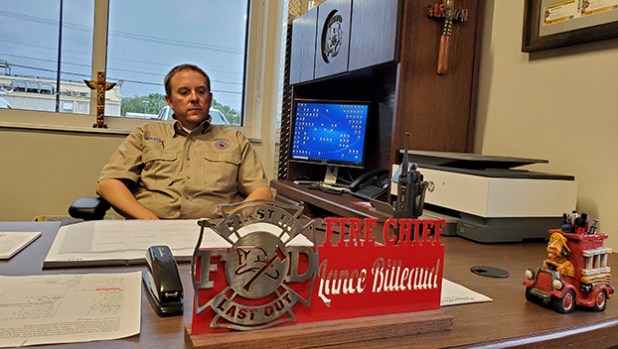 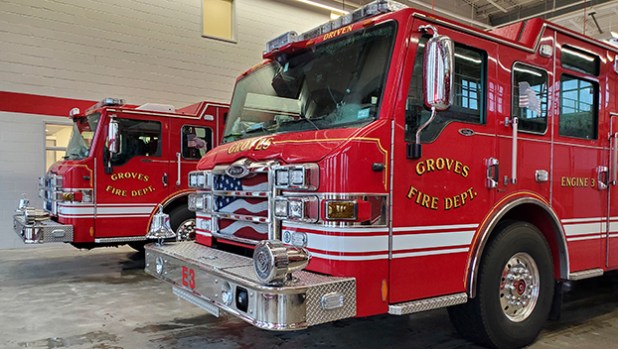 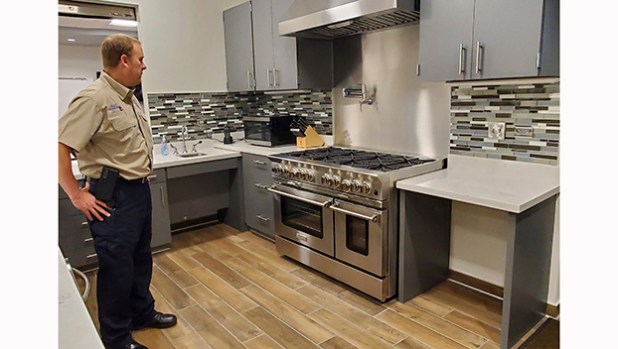 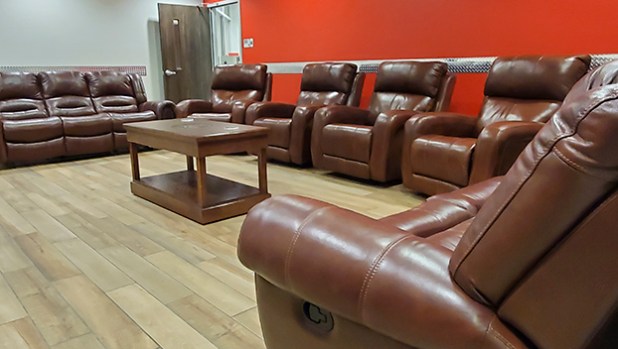 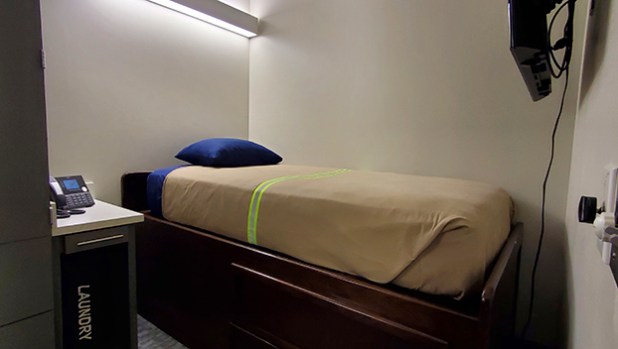 A view of one of the bunks in a dorm room. (Mary Meaux/The News) 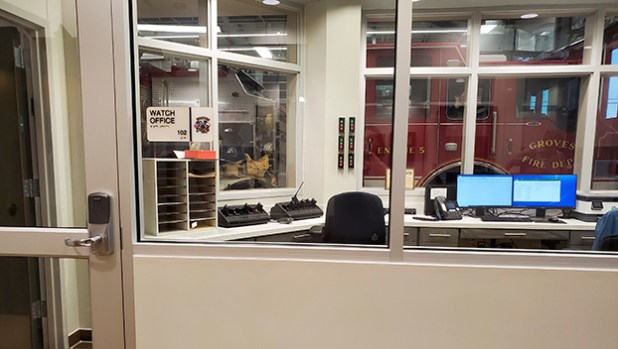 The watch office, which houses dispatch, allows views of the station and the bay where the fire trucks are located. (Mary Meaux/The News) 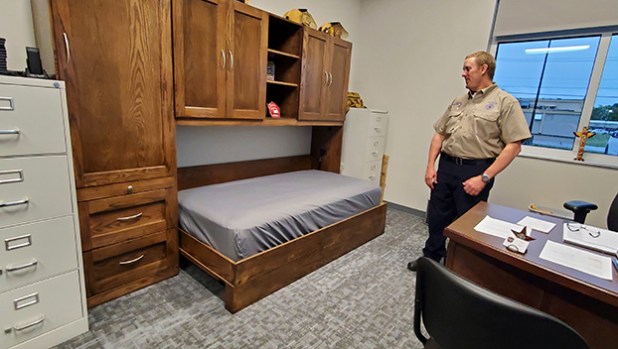 A hide-a-bed in Billeaud’s office will allow him comfort without having to had added an extra dorm room. (Mary Meaux/The News) 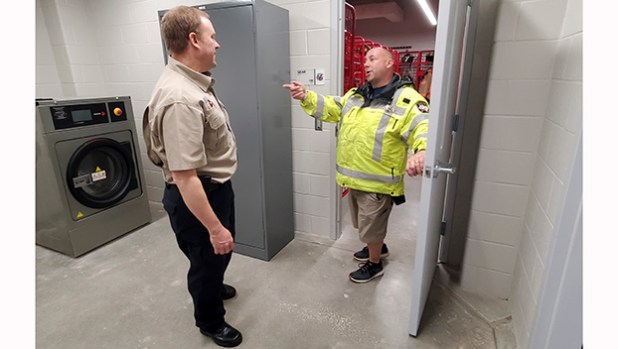 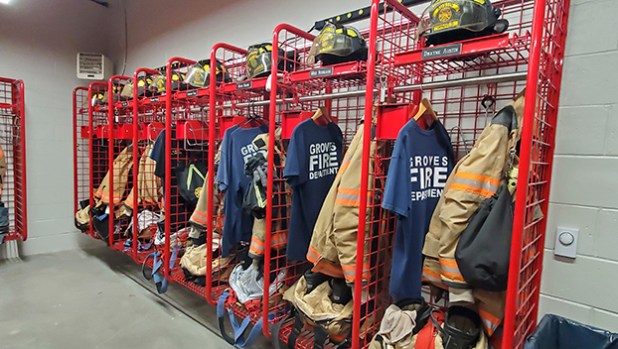 Bunker gear hangs in a room in the new facility. Previously the gear was hung on hooks in the bay area. (Mary Meaux/The News)

GROVES — Groves’ new fire station that sits behind Bruce’s Market Basket was many years in the making.

Groves Fire Department moved into the new station, 5911 West Washington, March 11, and the firefighters are adjusting to the much-needed space.

Members of the public will have a chance to see the new station up close with guided tours during a grand opening Saturday from 10 a.m. to noon. The event features a hose uncoupling ceremony, tours of the facility, refreshments, bounce house and more.

Every restroom has a shower sink and toilet. The last firehouse, 6150 Short St., was built more than 65 years ago.

The new digs have an investigator’s office — something the old one did not have. There is enough room to interview a individual, Billeaud said.

Inside the chief’s office is a bed hidden away in a set of wooden cabinets. Both he and Kelly Moore, assistant fire marshal, had previously each used air mattresses or couches to rest. Instead of adding more dorm rooms, they went the practical route with the hide-a-bed in their offices.

A walk down the hall leads to the training room, which was furnished with items made from the prison system. The price was less, and the quality high, Billeaud said.

The kitchen is big and features three separate pantries, one for each shift.

The back wall in each one sports a different color and coordinates with the wall calendar that shows different shifts — blue, red and green. There’s a built-in ice maker, large stove with the pot-fill faucet, and kitchen table and chairs.

An outdoor patio features another table and chairs, a barbecue pit and food prep/cleaning area.

The day room — one of the places the firefighters can sit and relax, is light and airy with new couches and a TV.

Other amenities include a work out room, two laundry rooms, one for clothes and the other located across the station for bunker gear.

The dormitory rooms are upstairs.

“Over there (old station) we had one area with partial rooms with six bunk beds,” Billeaud said. “The guys were sleeping on bunkbeds, homemade, and the mattresses were probably from early ‘90s, so they weren’t very comfortable.”

There are now six dorm rooms each with two beds. Firefighters work 24 hours on and 48 hours off so there is only one firefighter per room per shift.

There is another casual room upstairs featuring a computer, sofa, TV and large windows.

“We have a guy right now that’s going back to college for an emergency management degree and there’s been a couple of times where, in the evening, he’ll come up here and have peace and quiet to do his studies,” Billeaud said.

The bay, which holds the fire engines, has doors that open side–to-side as opposed to the garage door style. Billeaud likes that you can drive by and see the trucks whether the doors are open or not.

Lt. Jason Sheppard got his start with Groves as a 16-year-old volunteer, then moved up to a paid position. He’s been with GFD for 32 years. He said there is a lot more room in the new fire station, it’s very functional and is beyond their expectations.

And while much larger than they’ve worked from, Billeaud noted there is quick access to the fire trucks from any area of the building.

Planning for the new station officially kicked off in 2018 but unofficially began in the last 10 years under previous chief Dale Jackson.

Construction cost came in at $7.2 million and the total cost with engineering and architect fees, landscaping, all the furnishing, tower, electronics and more came to $8.3 million, Groves City Manager D.E. Sosa said.

Funding for the project is coming from certificates of obligation and use of a part of Groves Economic Development Corporation sales tax to pay the debt service on the certificates.