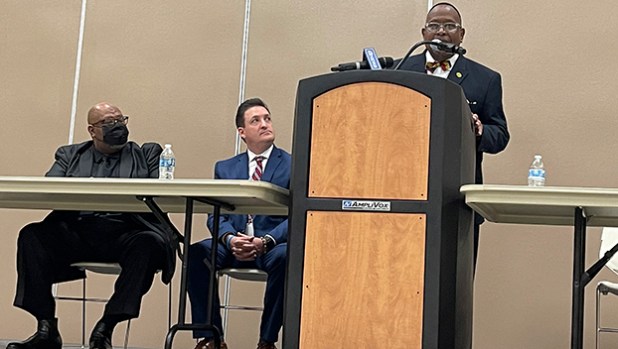 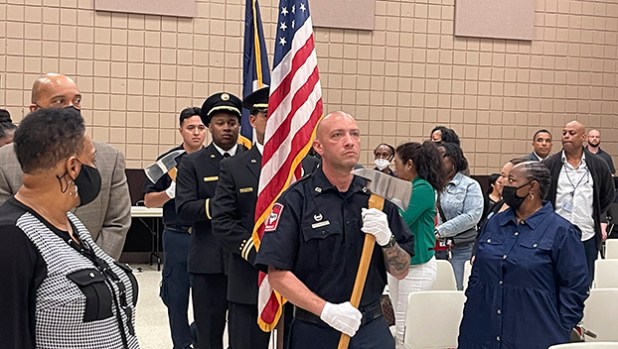 The Presentation of Colors was presented by members of the Port Arthur Fire Department. (Monique Batson/The News) 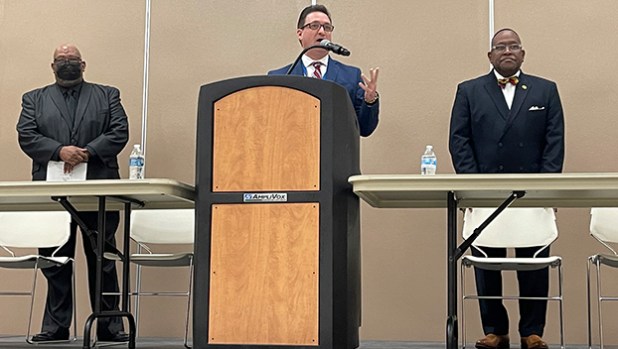 Joe Tant, center, served as Master of Ceremony for the State of the City Address in March. (Monique Batson/The News) 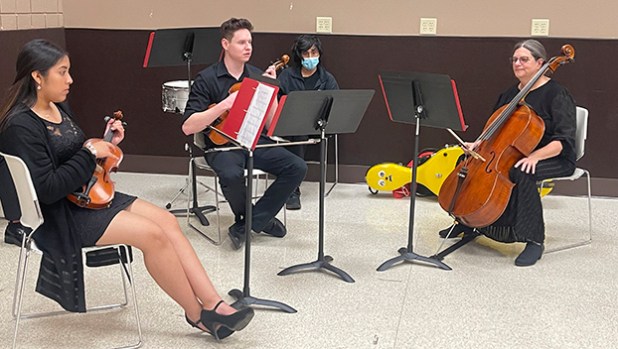 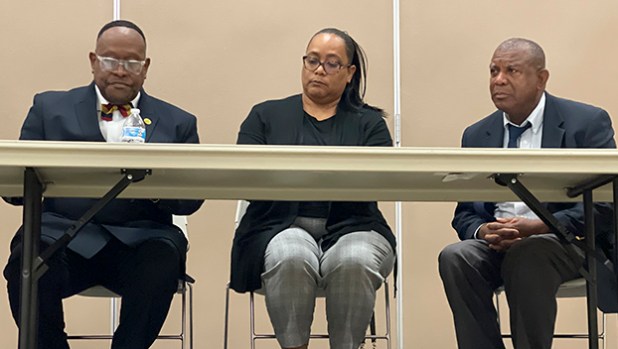 Discussing topics from infrastructure to downtown development, Port Arthur Mayor Thurman Bartie on Monday gave a State of the City Address that reflected on his 33 months in office.

The event, which was the first hosted by Bartie since his election in 2019, was held at Robert A. “Bob” Bowers Civic Center before a number of city, county and education leaders.

Joe Tant, financial manager of the Greater Port Arthur Chamber of Commerce, served as Master of Ceremony. Rev. Jay Austin gave the invocation. And members of the Port Arthur Fire Department gave the Presentation of Colors, while members of the Bob Hope Schools Orchestra played the National Anthem.

“My mayoral journey…has experienced circumstances and vicissitudes consistent with life in America,” Bartie said before pointing out tropical and winter weather events, COVID-19 and budgetary concerns. “Each of these have allowed for dialogue from all involved and solutions reached to bring about intelligent resolve to the citizenry of Port Arthur, Texas. Moving forward, I seek the opportunity to continue the progress and employ this occasion to further expound on the accomplishments of being mayor of the greatest city in the United States of America.”

The mayor discussed the nearly-$2 trillion American Rescue Plan Act, from which Port Arthur received $26,731,836. Of the money, $18 million was allotted for water and wastewater treatment improvement, $3 million to the Sabine Pass Waste Water Treatment Plant, $5 million to water mains within the city, $2 million for landfill stabilization and $1million for wi-fi at city parks.

The Port Arthur Public Health Department, which also serves Mid County, will receive $2 million for a vaccination center, while an additional $2 million will go to drainage improvement on the west side of Port Arthur.

“It is evident that the state of our infrastructure system in Port Arthur is being addressed and our future here looks pleasing,” Bartie said.

Public safety was also a topic, with the mayor highlighting collective bargaining agreements with the police and fire unions.

“Although we have experienced unnecessary murders during my tenure, the percentage is low for a city our size,” he said. “However, I personally hope and pray that it would be zero.”

Port Arthur experienced its fifth homicide of 2022 on March 11 when Chaddric Lanes, 39, was found fatally stabbed in the 800 block of Stilwell Boulevard. Ahmad Acrond was arrested in connection with the crime and charged with murder. He is currently in the Jefferson County Jail on a $1 million bond.

Bartie addressed the downtown restoration project by Motiva Enterprises that was announced in 2017 but came to a halt last year.

“We have yet to be given a definite answer as to when and if this project will return,” he said. “The entire city was counting on this project to anchor a resurgence or gentrification of the downtown area. This, however, is a direct result of the COVID pandemic and the ill effects to our community.”

Motiva representatives went before council in August to address the lack of continued construction to the Federal Building and Adams Building on Austin Avenue, which were purchased by the company to house approximately 500 contractors and personnel. A spokesperson cited an “extreme volatile market” and “unprecedented financial times for the refiners” as the reason for the stalled project.

Bartie spoke on climate change before concluding the address.

“Finally, let’s reimagine our purpose for being good citizens in a magnificent city, the purpose of being our city’s keeper, doing all we can to uplift not tear down,” he said.