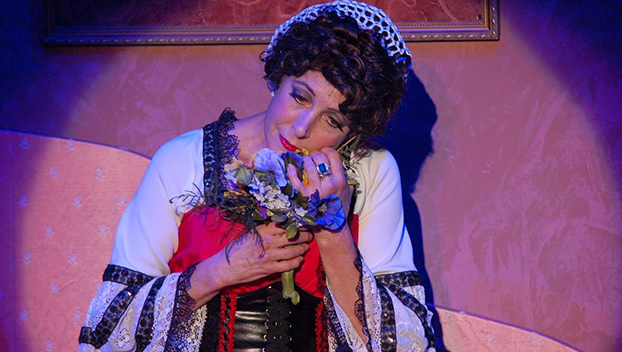 Mid County resident and member of the Beaumont Community Players Victoria LeBlanc is portraying Costanza in the group's “Enchanted April.” LeBlanc is seen here as Lilli/Kate from BCP’s 2018 production of 'Kiss Me Kate.' (Courtesy photo)

Victoria LeBlanc doesn’t speak Italian but with the help of Google Translate, she’s ready to dive into her character for the upcoming production of “Enchanted April.”

LeBlanc, a Mid County resident and local teacher, is a member of Beaumont Community Players. BCP will present the play April 1-16 at 4155 Laurel Ave., Beaumont.

LeBlanc portrays Costanza, a housekeeper who speaks only Italian. The veteran of the stage did her homework to portray the woman who brings a bit of comedic relief to the play based on the 1920s book by Elizabeth von Arnim.  Mathew Barber adapted the play, which was nominated for a Tony award, director Robert Fong said.

The play is about a woman from England that is in a sort of post-World War I depression. Many people died in the war and the woman decides the best thing is for her to go to Italy and rent a villa. She engages three other women to go with her, and all of them are different.

“The cool thing about it is their husbands want to go to Italy but are not invited,” Fong said. “So the four women go to Italy and experience the spiritual transformation they seek. It’s really a sweet comedy. And after, the two husbands show up later.”

LeBlanc has read the book and, to her, the play is deceptively layered.

“On the surface it’s light-hearted and frivolous, but it deals with real people who don’t know how to resolve issues until they are out of their ordinary pathway,” LeBlanc said, adding while away the women see each other in a new way and all of them blossom in the environment.

Fong likened it to women after WWI becoming more independent and assertive.

But first and foremost, it’s a comedy, he said.

LeBlanc explained her character is like some of the comedic characters of Shakespeare, such as the gravedigger in Hamlet. Her part is small but will give the comedic view of what’s going on.

Fong believes audiences will be pleased.

“Without any reservation, if audiences come see this, they will see some of the best performances by a local community theater I’ve ever seen,” he said. “I think they will be amazed at how good the acting is overall. I’m excited about it.”

Tickets are $26 for adults, and senior and student tickets are $24. There is a $2.50 ticketing fee per ticket and when using your credit card, there will be a processing fee of 3.75 percent.

Tickets can be purchased online at beaumontstages.com