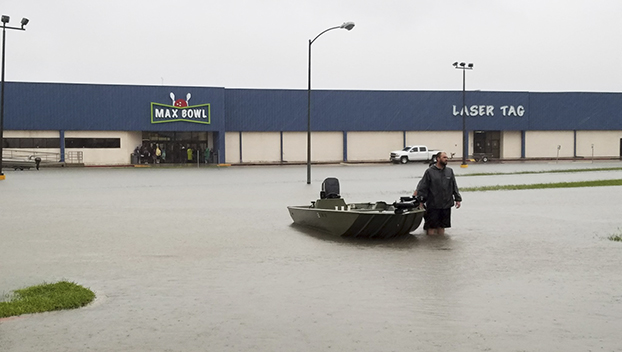 Following the remnants of Hurricane Harvey, Commissioner Michael Sinegal was left to deal with water — water in his house, water in his neighbors’ houses, and water throughout the county he serves.

“I had 2 feet of water in my home,” he said. “Thank God I had people to support me. I did not have flood insurance because I was in a no flood zone. Through the generosity of others, I was able to repair my home while being out helping other people find funding for their homes.”

Funding was hard to come by following the 2017 storm that hovered over Southeast Texas and dropped more than 60 inches of water.

But officials are hoping help will be easier in the future after a recent release from the U.S. Department of Housing and Urban Development saying the Texas General Land Office discriminated against communities of color when disbursing money from a $4 billion Community Development Block Grant for disaster mitigation.

The application process opened in May 2020, with the first round of funding announced on May 21, 2021.

Jefferson County, which broke the U.S. record for most rainfall during a tropical event after 60.58 inches of water fell in Nederland, received zero dollars.

“It was a travesty that Jefferson County did not receive any money,” Sinegal said before speaking specifically of the area within his precinct. “Any time funding comes, we get it because of our zip codes. Sometimes they’re the last to be thought about when the funding starts flowing. That’s something we have to remind leadership, not just white leadership. A lot of funding we are getting is because we’re in disadvantaged areas with disadvantaged zip codes.”

According to 2021 population estimates from the U.S. Census Bureau, Jefferson County is 59.1 percent white, 34.1 percent Black, and 22.1 percent Hispanic. The median household income is $51,248.

The same report finds Port Arthur to have a median household income of $36,557.

In findings published in 2018 by the Episcopal Health Foundation, the largest number of Harvey-related applications for assistance from the Federal Emergency Management Agency was 13,654 and came from the Port Arthur zip code 77642, bordering Groves which recorded the second-highest amount of rainfall from Harvey at 60.54 inches. One Beaumont zip code, 77705, had 8,269 applications.

Residents of Jasper County, which received nearly $30 million in funding from GLO, filed just over 4,000 applications.

“I felt all along that it was not fair and was discriminatory, and has been since 2005 with Hurricane Rita,” said John Beard, CEO of Port Arthur Community Action Network, which joined with Texas Housers and other nearby non-profits and government entities to prove discrimination was used in the GLO’s distribution of funds. “The method of distribution gave more money per capita to communities that were far more affluent.”

The first was excluding many HUD Most-Impacted and Distressed areas from competing for half of the funding, when 90 percent of eligible residents lived in those areas. The second was judging applicants based on jurisdiction size.

“It’s a huge victory for Port Arthur that was devastated by Harvey and got no mitigation funds to help it prepare for the next hurricane or next storm,” said David Wheaton, advocacy director for Texas Housers.  “It’s also a major victory for civil rights.”

Wheaton said while HUD’s findings will not provide retroactive funding for areas that received none, the next step will be a voluntary compliance agreement between the GLO and affected cities and counties.

“(It’s) up to the GLO if they would like to come into that,” Wheaton said. “We would be able to sit at the table and negotiate with them. Part of that negotiation would be making sure that Port Arthur gets that funding.”

Following HUD’s findings, the GLO released a statement saying it was considering all actions, including legal action against HUD, “to release this iron-fished grip on mitigation funding and restore the pipeline of funds to communities.”