The Port Neches-Groves Indians have punched their ticket to the playoffs and are in position to win their fifth-consecutive district title today.

The girls soccer team sits atop District 21-5A with their final game of the regular season scheduled against Memorial at home. 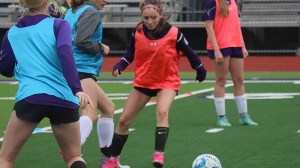 Emma Zumo passes the ball during a drill at practice. (Chris Moore/The News)

Emma Zumo, who is one of the team’s leaders, has played an important role in the team’s success, according to Head Coach Aimee Bates.

As a senior, Zumo has seen PNG make deep playoff pushes during her time on varsity, but the Indians star said she has her sights set on making it further this season. Last year, PNG made it to the third round of the playoffs.

The Indians will take Spring Break off before playing Little Cypress-Mauriceville in a tune-up when the girls return to school before the playoffs start.