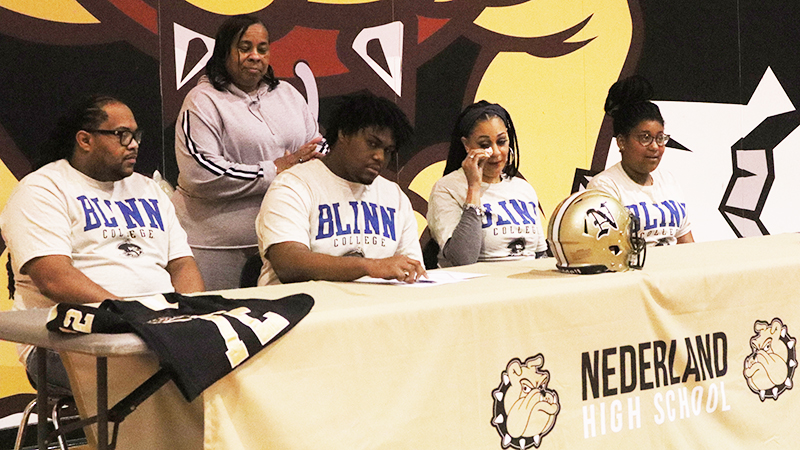 Marshall started at right tackle for the Bulldogs in 2021 and was part of the group that made it to the third round of the playoffs in 2020.

The senior joins fellow Bulldogs offensive lineman Ricky Johnson on the Blinn roster next season. Johnson announced in February he will join the Buccaneers.

Marshall said he had been in contact with coaches at Blinn ever since Nederland’s season ended.

“It feels really good,” Marshall said of committing to Blinn. “I have been working really hard at it. This is a two-year school, so I can work harder to get a D-I offer.”

Marshall’s his favorite memory from the Bulldogs is being around teammates.

“I am going to miss all of the camp fun and being around all of my brothers,” he said.

“We had a few this year,” he said. “We are all excited to see what (Marshall) is going to do (at Blinn). He doesn’t even realize the growth he has in front of him. I remember when he was a freshman on varsity. He was on defense and moved over to the offensive side. We look forward to seeing what he does at the next level and making his family and this community very proud.”

Marshall said his most memorable play came against Barbers Hill this season.

“They had a backup come in and I absolutely laid him out,” he said with a smile.

The Bulldogs went 6-4 this season, narrowly missing the postseason. During Marshall’s time with Nederland, the team went 29-16 with two district titles.

This past season, the Nederland seniors got their first win over rival Port Neches-Groves in high school.

Blinn went 5-5 during the fall. The two Bulldogs will likely be joining former Nederland running back Josh Mazyck, who joined the program this past year.