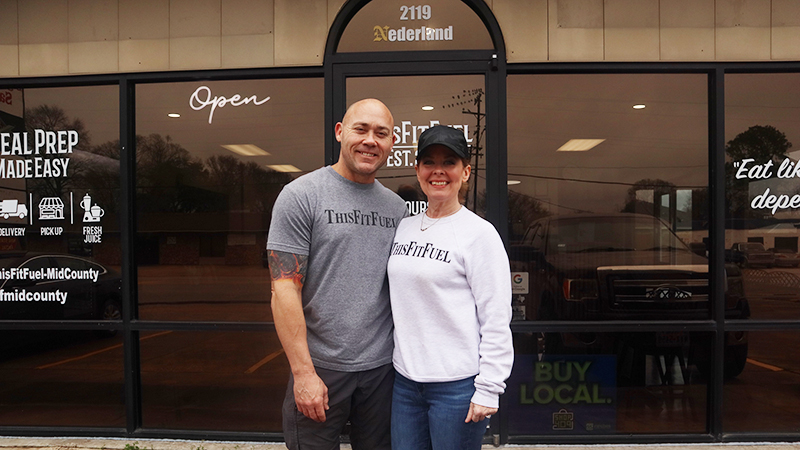 Jason and Amber Dickerson have actively worked on improving their health for the majority of their lives.

Amber began working out in college, and Jason was in the U.S. Marine Corps.

“After I got out, for 10 years, I did nothing and got overweight,” Jason said. “In 2006, I decided to get back to my fighting weight. I knew I had the discipline, started running and dropped about 25 lbs. I saw a friend of mine that I worked with and he was jacked. He said he had been lifting weights. I knew I wanted to look like that.”

After gaining 20 lbs. of muscle, Jason decided to start bodybuilding.

“I was getting ready to start showing before I changed jobs and didn’t have my workout partner anymore,” Jason said. “Not to sound conceited, but at the gyms I was going to, there was no one to spot me because, at that time, I was benching 420 (pounds.).”

Together, they had been working out at many local gyms, but felt like they needed more of a challenge.

“I saw a friend of mine eating out one day and she looked amazing,” Amber said. “I asked her what she had been doing and she had been going to CrossFit. I told Jason we were going to try. It is free on Saturday mornings.”

From that moment on, the two were hooked. Now, they are making time to get back to going regularly, which has been difficult since opening their new eatery, This Fit Fuel on Nederland Avenue. At their peak, they were going to CrossFit five days a week.

“There is accountability and camaraderie that you get in CrossFit that I didn’t get in other gyms,” she said. “There were nice people in other gyms, but it is different. Every day, it is something different with CrossFit. There is always a new movement. It is to scale. I will do the same workout as him, but it won’t be the same weight. If he is doing handstand pushups, I am doing a modified version of that. I liked the modification and the group atmosphere.”

During that time, Jason began doing meal preps for him and Amber.

“We started the paleo diet, which is no grains, no sugars, not wheat and not artificials,” he said. “I was cooking different things. After about a year, it became a lot to meal prep.”

Within a six-month span in late 2020 to early 2021, Jason and Amber were let go from their jobs at the company, for which they both worked.

“I knew that Aaron (Alverson), who owns the This Fit Fuel in Beaumont, opened a Pearland location,” Jason said. “I told Amber that we should reach out about opening a location. I said that it was the same thing we were doing on a bigger scale.”

After a conversation about the pros and cons of opening their own business, Jason called Alverson, who suggested a Mid County location.

The two opened the Nederland location in November and said they are able to feel closer to their passion of helping others achieve their fitness goals. Call 409-527-2909 for more information.