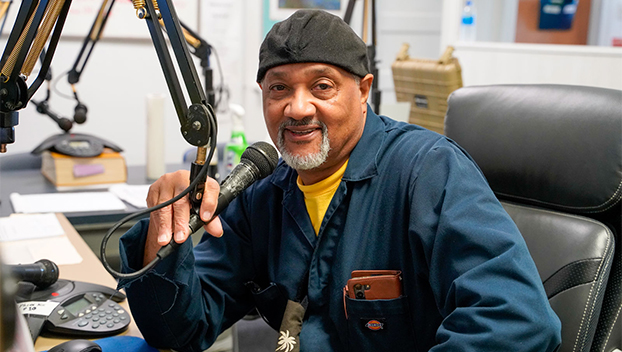 Born in 1953, Stephen Mosely has spent his entire life in Port Arthur.

His life includes good years and “some not so good” years, but he refers to it as balanced.

“I have great parents, family, good friends and a 35-year marriage to (my) wonderful wife and life partner Wendy T. Mosely and our three daughters,” he said. “I have a healthy working history and have dedicated my time to public service that blesses my soul and keeps me grounded knowing my purpose in life.”

The purpose, he said, was to “provide exciting and timely programming that entertains and helps empower citizens educationally, spiritually, economically and socially.”

In 2008, due to political differences, the station went off air. However, he obtained another license that year and launched again on KSAP 96.9.

“The station airs over 3,000 hours of minority programming each year, 50 percent of which is locally produced. Our listeners, locally and worldwide, are treated to a weekly mix of news, local public affairs, programming and a host of traditional and contemporary music,” he said.

“It is very important that we continue to prepare the next generation of broadcasters who will continue to provide our communities with vital educational, informational and entertainment services to our ever-growing audience.”

And with the debut of “The Soul of Port Arthur: African American Heritage Tour,” Mosely is one of many local people and stories available to anyone that visits the Port Arthur Convention and Visitors Bureau’s webpage. 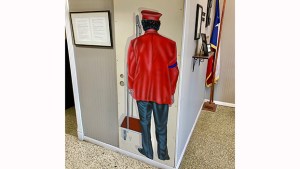 Pictured is a painting depicting Leon Jenkins, who worked at Jack Brooks Regional Airport for decades until his 2007 death at age 102. (Courtesy photo)

“We want residents and visitors to experience some of Port Arthur’s proud history that includes worship at the city’s churches, humanitarian, military service and artistic contributions,” said Darrah Castillo, destination management specialist for the bureau. “The Museum of the Gulf Coast already highlights area musicians from Barbara Lynn and Zachary Breaux to Bun B and athletes who called Port Arthur home.”

The museum is one of the many things featured on the tribute page, described as a “motivational first stop” for anyone visiting Port Arthur. But it also highlights some facts housed in the museum that also highlight Black history, such as that the first over-the-body washboard was created in the city.

The virtual exhibit can be found by clicking here.

In 1946, “King of Zydeco” and Grammy winner Clifton Chenier designed the instrument while working at Gulf Refinery, according to information from the museum’s Hall of Fame. His co-worker Willie Landry created it.

“This collection is simply a roundup to highlight some people and places and encourage everyone to learn more,” Castillo said. “We can picnic in Barbara Jacket Park, view murals and sculptures and sing Dwight Wagner’s ‘City by the Sea’ as we enjoy Port Arthur.”

Unfamiliar with the song?

The website explains it too, quoting the local educator.

And visitors can find the lyrics there, too.

Castillo credited Children’s Librarian Carolyn Thibodeaux for helping create the project, and also steering the bureau in the direction of people who have and continue to create history in Port Arthur.

“As the librarian that’s been here for 20 years, I feel like this is home,” Thibodeaux said. “But there is historical information that I’m constantly researching and learning about Port Arthur. We need to dialogue and what a better way than the library and visitors bureau working together. It’s a fabulous collective partnership between the entities and the community.”

Thibodeaux said even though it’s called “The Soul of Port Arthur,” she thinks of it more as a journey.

“This collection features topics from Juneteenth and trail riders to Mr. Leon’s tribute at our airport,” Castillo said. “Port Arthur has a strong history and reflects pride that matters.”

Mr. Leon is Leon Jenkins, who worked at the Jack Brooks Regional Airport for decades. When he died in 2007 at the age of 102, he was still an employee.

Inside the airport is a painting memorializing the long-time porter.

“We are still creating this history, so we are welcome to suggestions for additions,” she said.

Eyes on Austin — Titans have sights set on…