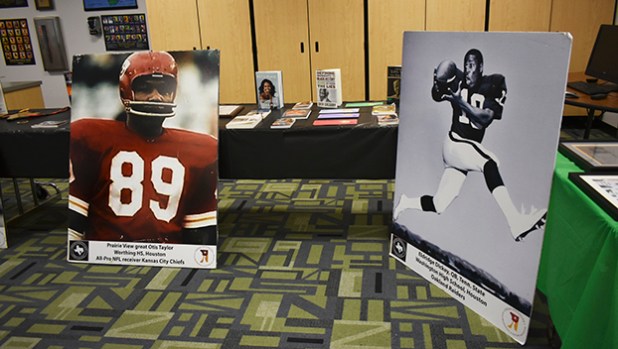 Some of the many displays at the school library. (Mary Meaux/The News) 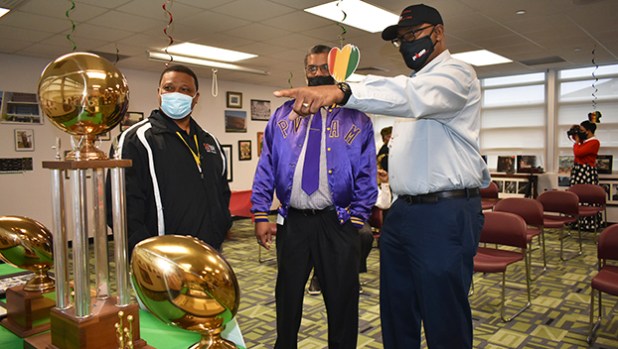 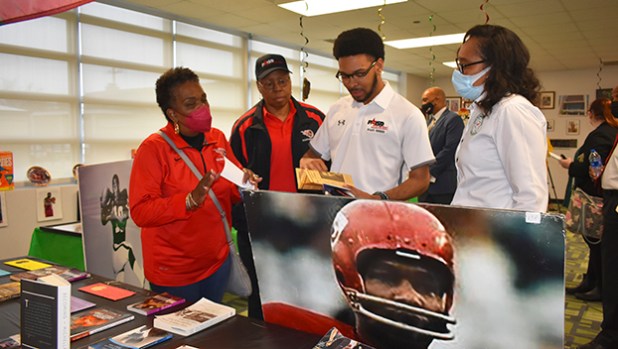 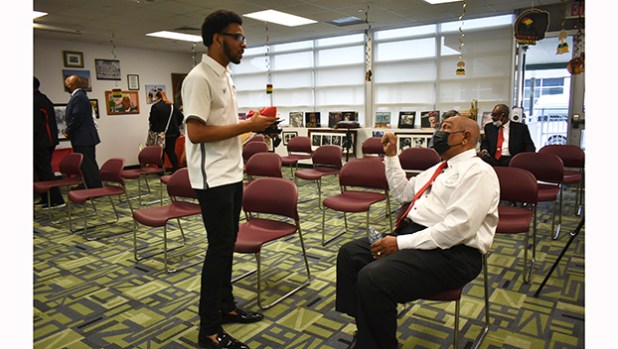 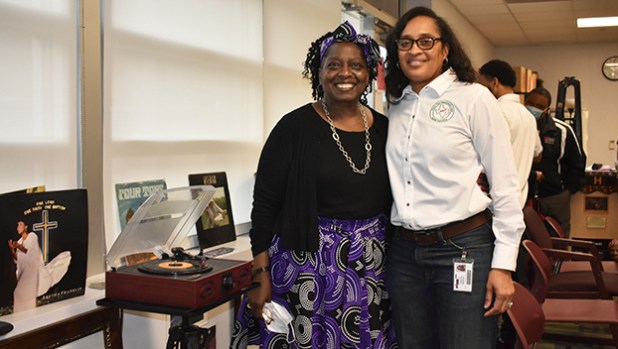 Robert Brown may have described it the best when he called the display in the library of a Port Arthur school “Black history at its finest.”

Brown, chairman of the Prairie View Interscholastic League Coaching Association, shared some of the organization’s traveling museum artifacts at the Port Arthur Alternative Campus Wednesday. Tanuya Worthy, executive director of the organization and also a teacher at the campus as well as former assistant principal and assistant athletic director, added memorabilia to the collection that stretched to all corners of the room.

Brown pointed out the poster-sized images of various Black athletes such as Bubba Smith, Mean Joe Greene and Eldridge Dickey, the first Black quarterback drafted by a professional team in the first round. He earned a spot on the Oakland Raiders in 1968, but never got a chance to play in his preferred position due to the color of his skin.

Worthy noted the exhibit spans athletics and civic rights to music to English literature and more.

An old Victrola player in the room played various records to the delight of the visitors, such as PAISD Trustee Taylor Getwood.

PAAC Principal Dr. Brenda Brooks-Coleman said she asked Worthy and received permission to keep the exhibit up through the rest of the school year.

“I’m a firm believer you can’t go anywhere unless you know where you come from. It builds on the thirst to want it, to want to know you’ve got to have it. You can’t escape it,” Brooks-Coleman said. “I used to not want to hear my grandmother’s stories. Now I quote her every day when something reminds me of something that she said or tried to teach me. You’ve got to have this knowledge.”

Brooks-Coleman looked over at the Victrola player and the other parts of the exhibit and called it magnificent.

A banner in the room celebrated “Small town, Big People” with photos of Port Arthur athletes and musicians. These, she said, are people the kids know of.

And while the student population at the school is there due to various disciplinary issues, Brooks-Coleman is using all tools at her disposal to create teaching moments.

“I’m teaching them how to make better decisions,” she said. “On Thursdays we have Girl Talk and on Fridays we have Guy Talk and we talk to them about better choices, how to be better people, how to think about how things are going around and how they don’t have to just react. You have to step back. They say woosah — we’re going to woosah, take a step back.”

Dr. Johnny Brown, former superintendent at Port Arthur Independent School District and assistant executive director of the PVILCA, said the exhibit is beautiful and brings back nice memories of the past but also encouragement for the future.

“And that’s part of what this is all about, to make sure the youth are reminded about what things happened before their time so they can learn from those things and they too can become successful in ways otherwise they may never have imagined.”

Earlier in the day a student was asked the definition of segregation, and the student was able to answer correctly, Johnny Brown said.

“But beyond that point…let’s continue to make things better so that the quality of life can improve for all of us rather than to experience the things that were in our dark past,” he said. “This a giant, wonderful learning opportunity for our children and for the adults.”

Due to COVID safety measures, the exhibit is not open to the public.