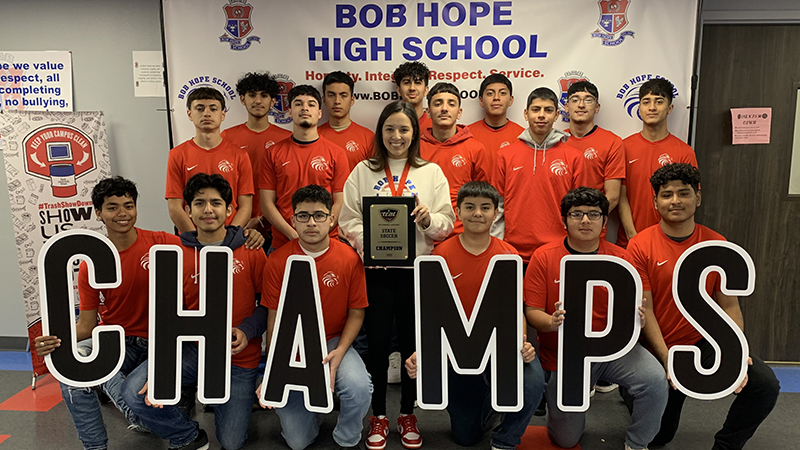 In her second season as the Bob Hope boy’s soccer coach, Isleny Urbina led her team to a state title and a 9-3-1 record.

Urbina did not know she would be coaching the boys team when she first applied to work at Bob Hope.

“Once they told me, I knew it was a challenge I was willing to accept,” Urbina said. “My first year was last year and I didn’t have an assistant coach. It was a big group of boys. I didn’t feel like they fully trusted me at first because I am a girl. When they realized I knew the game, they bought in.”

Now, Urbina has a state title to add to her resume.

“I am very happy for the players,” she said. “Last year, we didn’t have many games due to COVID. Not a lot of kids showed up for school because they could do it online. Last year’s seniors were upset and the upcoming seniors wanted to win state so bad.”

Urbina has first-hand knowledge of how fragile a high school playing career can be.

“I got injured my high senior year, so I would let them know to play every game as if it were their last,” she said.

Sophmore Juanpablo Anaya and junior Alexis Chavez said they were proud of the team.

“It was mainly teamwork,” Anaya said.

Chavez said the team’s chemistry was the most important factor in winning a state title.

“We had to build up the chemistry through the season and then we had it going good,” Chavez said. “We always played outside together at lunch. From there, we just built up better and better. During the games, we did the same things.”

The junior said the most difficult game came in a 3-0 loss to East Chambers in January.

“They were really fast,” he said. “We were lacking a little chemistry.”

Both boys said the team’s best game came in an 8-2 win over Hamshire-Fannett.

“Everything was good,” Anaya said. “We were all happy and playing good. We were just having fun and doing our thing.”

The state title was one-game tournament against Houston Genesis.

“I don’t know much of the school’s history, but my athletic director said that was the school that beat us two years ago,” Urbina said. “I felt pretty confident
because I knew we were pretty good. The game started and we scored the first goal and I knew we could do it.”

The game went to penalty kicks with Bob Hope coming out on top 4-3.

The team will lose nine seniors to graduation, but Urbina said she is looking forward to the rebuild.

“I had a lot of freshmen on the team this year and for tryouts we had a lot of talent,” she said. “And like they said, there is a whole lunch league, so it won’t be bad.”