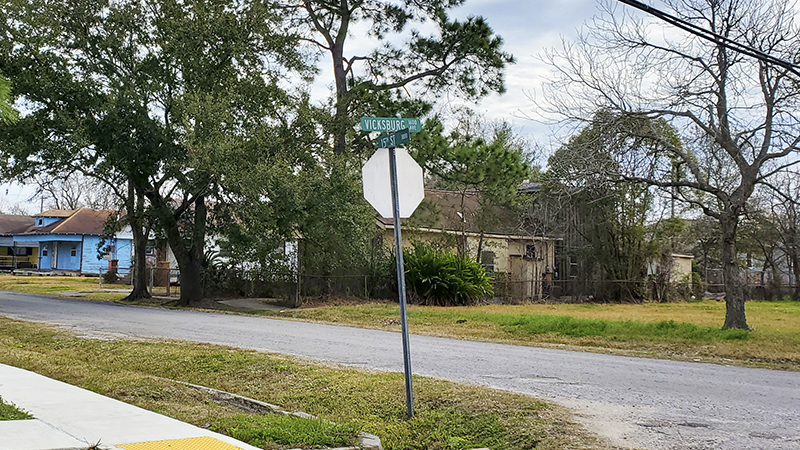 A home invasion robbery where shots were fired occurred Thursday night in the 1800 block of 15th Street in Port Arthur. (Mary Meaux/The News)

Gunfire rang out Thursday night just steps from a city park when two people entered a home and robbed its occupants.

Port Arthur Deputy Chief Reid Rowe said at least one of the suspects in the crime was a male but did not elaborate further.

Witnesses told police at the scene two people entered the home without permission, brandished a firearm and demanded money.

When asked if the suspects forced entry to the home or walked in, Rowe said because they did not have permission to enter, it is still a crime.

It is not known if the victims in the home knew or were acquainted with the intruders. In addition, there is nothing to indicate the crime is drug related.

Friday morning the neighborhood was devoid of any signs that a home invasion had occurred the previous night. Several people were seen outside near their garage, while down the road a man was talking on his phone while sitting on the porch.

Port Arthur Mayor Thurman Bartie has spoke often of the violence in the city and said he wishes he had an answer to make the violence stop.

Bartie was leaving the Greater Port Arthur Chamber of Commerce Annual Banquet at the Robert A. “Bob” Bowers Civic Center Thursday night when he received a text from someone telling him that a crime involving a gun had occurred.

“(Violence) is very disturbing to me because it appears to be without a set pattern, erratic,” Bartie said, adding he had not been briefed on the incident yet.

Anyone with information about this crime can call Crime Stoppers of Southeast Texas at 409-833-TIPS. You won’t be asked your name and you may be eligible for a cash reward. You can also make an anonymous tip to Crime Stoppers by downloading the P3 Tips app on your smartphone.