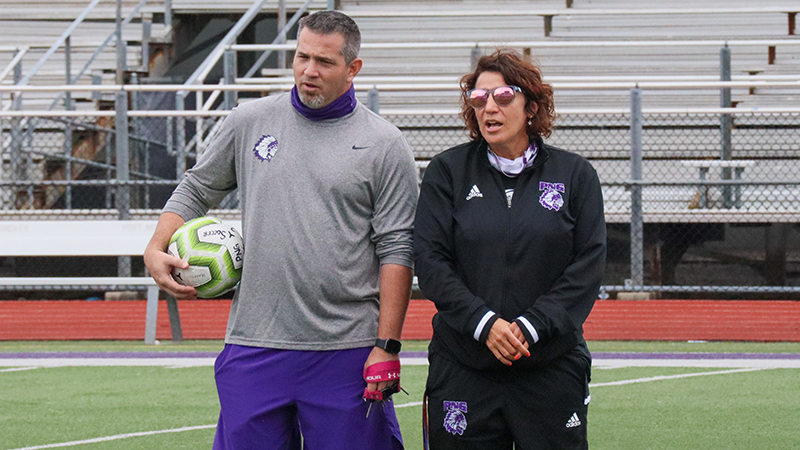 Midway through the soccer season, the Port Neches-Groves Indians girls soccer team is in first place in District 21-5A.

Head Coach Aimee Bates’ team is playing well all over the field.

“We are playing great team defense,” she said. “That is from the frontline to the backline. We are defending better as a whole than we have all year. We are organized, and I have been very happy with that.”

Marlee Sonnier, a junior, has been a leader.

“I am very proud of Marlee Sonnier,” Bates said. “She has really stepped up and led our attack. She is the one up their with the most experience. She is teaching them the runs we make and helping them stay positive.”

While PNG seems to be firing on all cylinders, Bates would like to see her team possess the ball better in the second half of district play. Bates said her team’s best game came in a 2-0 win over Barbers Hill earlier this month.

“I think every coach would say this, but I still want us to score better and find better opportunities in the final third,” she said. “The second half of district, I would like to see us be more possessive of the ball and get in the final third. You always like to pick up steam.”

PNG beat rival Nederland 11-0 in January and is hoping to use the second half of the season to get ready for a deep playoff push.

Bates said her team has had tremendous effort and would like to see it continue in the final six games.

“I just want them to click and come together and play pretty Indian soccer,” she said.

Coming into the week, PNG sat atop the district with Barbers Hill, Crosby and Galena Park trailing in second, third and fourth place, respectively.

Nederland is sitting in fifth place with Memorial behind in sixth.

The Bulldogs are coming off a 4-1 win over Beaumont United and face Galena Park and Memorial this week. Nederland recorded their second district win against Memorial.

The Titans entered the week on a three-game losing streak. The Titans host PNG and Nederland this week. Their lone district win came against Beaumont United.