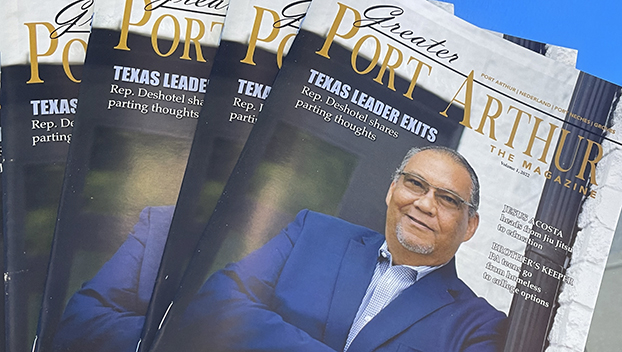 The best storytelling comes from relaxed subjects who are in a mood to share.

It’s even better when these men and women, who are usually “on” during their roles as public figures, bring their guards down a bit in an effort to let readers inside their thought processes and motivations.

Thankfully, that is accomplished in the latest edition of Greater Port Arthur The Magazine.

Our writing team, which includes Mary Meaux, Monique Batson, Chris Moore and myself, was able to reach this edition’s story subjects at their most open.

We’re grateful they let us in, allowing all the time and runway needed to ask more in-depth questions and create more interesting stories.

It was four years ago, then-freshman Diamonique got into a verbal altercation with a coach during football practice and was ready to quit. As he walked off the field, Devuan rushed to calm and console him.

Quitting wasn’t going to be an option, just as it had not been an option when the two were homeless and going weeks without eating reliable meals.

The inner strength of these young men carried them through their teenage years and, through their will power and skill, led to a pretty special moment just more than a week ago.

Both were on the Memorial High School stage Feb. 2, signing to play football via scholarship at the next level with Kilgore College.

“It felt like a home, and there will be great opportunities,” Diamonique told Port Arthur Newsmedia of the decision to continue his education alongside his brother.

Diamonique gave that quote last week to Chris Moore, but it was the interview conducted weeks before with the siblings that allowed Chris the time, space and background to tell the story behind the story.

No one gets to National Signing Day on their own. This is a wonderful spotlight on brotherly love and talented spirits.

Similarly, if you were only judging a book by its cover, many would see Dr. Jesus Acosta for they job he holds today — campus director for Bob Hope High School.

What his students, their families and, maybe even his colleagues, don’t realize is Acosta has been a Jiu-Jitsu champion and drill sergeant.

Formerly active in the U.S. Air Force, Acosta’s story also includes his birth in Puerto Rico, the big move at 9 to New York City and an eventual path through the military and education.

“I always tell people the Air Force, and I think all of the military services, they give a lot of responsibility to young people,” he said in a story written by Monique Batson. “As I look back at it now, I was 19 and I was responsible for access to missiles that could destroy the entire world. That’s a lot for a 19-year-old, but they give you a lot of responsibilities.”

A background like that certainly provides the fortitude to look across a desk and meet a Port Arthur teenager with authenticity.

These are just two examples of a loaded and nuanced edition of Greater Port Arthur The Magazine.

I was lucky enough to speak with State Rep. Joe Deshotel, who surprised many in Southeast Texas when he announced he was stepping down from elected office to spend more time with his growing family.

The veteran Austin lawmaker and former Beaumont councilman shared some of his favorite memories of public service and chief concerns for the future of state government. He also talked about what it’s like to lose an election.

Deshotel’s story is one of many spotlighted in 2022’s Volume 1 of Greater Port Arthur The Magazine, which is available now.

Volume 1 includes numerous stories celebrating family links, triumph from adversity and those actively making a difference in our community.

These are important stories and would not be possible without the support of advertisers and sponsors. Please consider their goods and services in the future.