Titans ready for playoffs — “They play a faster game, so we will have to bring our A game” 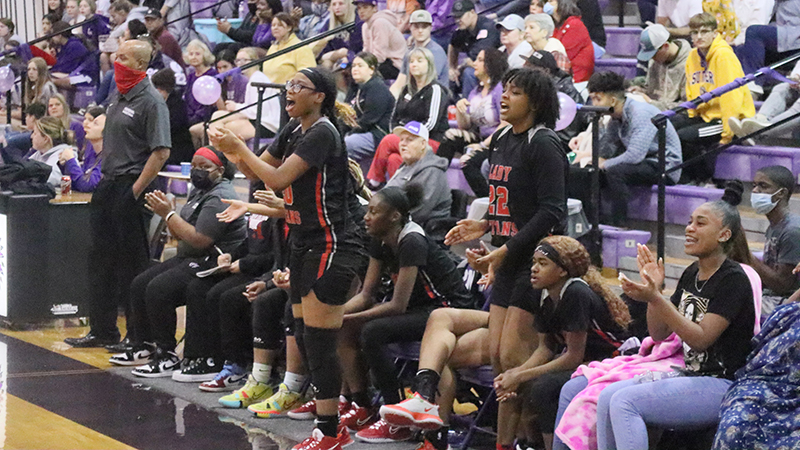 The Memorial bench cheers on the Titans against PNG. (Chris Moore/The News)

The Memorial Titans girls basketball team will travel to Baytown next week to tipoff the 5A state playoffs.

La Porte and Manvel decided the winner of their district with a coin flip this week. The Titans, who earned the fourth seed in District 21-5A will play La Porte Tuesday at 6 p.m. at Baytown Sterling.

“(La Porte) is having a good season,” Memorial Head Coach Kevin Henry said. “They finished tied for first in their district. They have one district loss. Their team is led by three guards. They shoot the ball pretty well. The guards handle the ball well. They move the ball well on offense.”

“They play a faster game, so we will have to bring our A game,” he said.

The Titans’ outside game has come alive as of late. The team hit 10 3-pointers in the regular season finale against Port Neches-Groves this week.

Charnel Jones led the way with 9 points, including five 3s against the Indians.

Memorial senior Erial Fontenot said she is happy to be in the playoffs in her final season.

“We were in the weight room after our game against Galena Park and coach came in and said congratulations on making the playoffs,” Fontenot said. “We were happy. We all just started screaming.”

Fontenot said La Porte is a good team, but she added that the Titans believe they can win.

“Right now, they aren’t showing that they are a Hardin-Jefferson type,” she said. “They are beatable.”

Henry said for his team to pull off the upset in the playoffs, his team will need a complete game.

On the flip side, the coach said his post players are going to have to take advantage of one-on-one matchups if La Porte defenders stay at home on the perimeter.

“It is going to be very important that we make the most of our attempts on the offensive side of the floor,” Henry said.

Memorial post player Amonti Edwards said the team will have to lock in on Tuesday.

“We have worked hard to make it here,” she said. “We are going to have to play good defense and press. Their guards are good shooters. We have to stop them from shooting on the outside. Inside, we have the mismatches.”

A fast start could be key for Memorial, the coach said.