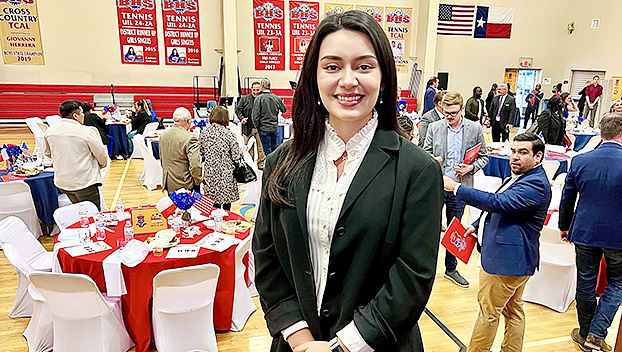 Elected leaders with offices in Washington, D.C. and Austin spoke today in Port Arthur about the need for school choice, but the most poignant message was delivered by a 2018 graduate of Bob Hope High School.

Yesenia Loera began attending Bob Hope schools in the sixth grade because it was close to her then-Port Arthur home.

She only strove for and attended college because she was taking dual-enrollment courses in high school.

Today, she is double major Lamar University graduate in finance and economics. She began working as a corporate banking analyst at Texas Capital Bank in August, and she shared her story with a room full of Greater Port Arthur’s most prominent elected leaders to talk about opportunity.

“One of the things that sets us apart from many other schools is because we offer the opportunity to have college classes,” Loera said. “I would say having college classes while being in high school was one of the main reasons that I even attended college.”

Loera didn’t know as a sixth grader that she would end up in finance, but is confident in saying Bob Hope Schools provided the path needed for a great career.

“I love my job and I love everyone that I work with,” she said. “None of that would have happened had I not started right here.”

One of the day’s highlights included performances by the school’s seventh grade honor band on string and brass instruments.

State Sen. Brandon Creighton and U.S. Rep. Randy Weber spoke of their support for school choice and their desire to create more of it for parents, whether that is through charter school expansion or the use of school vouchers.

In mentioning the reconvening of Texas lawmakers in Austin in early 2023, Creighton said Texas is supposed to take the lead and be bold on its issues.

He said there is a lot to learn from Bob Hope School and he intends to be in the front of the pack for those issues.

“We should have the strongest parents bill of rights in the nation for education,” Creighton said, adding alternatives and choices are a must for Texas parents.

Weber said there is growing support for school choice because progress has already begun.

“Charter schools have the flexibility to adapt to the educational needs of individual students and encourage more innovation in education,” he said. “I know there is no magic solution, but school choice is a huge step in the right way. We should have learned that by now. Schools of choice can specialize.”

Weber said the dream of school choice is not an option for too many low-income families.

“School choice means access to a quality education independent of a family’s ability to buy an expensive house or to pay for it twice,” he said.

The veteran U.S. congressman stressed more decision-making authority on education must be returned to the local and state level.