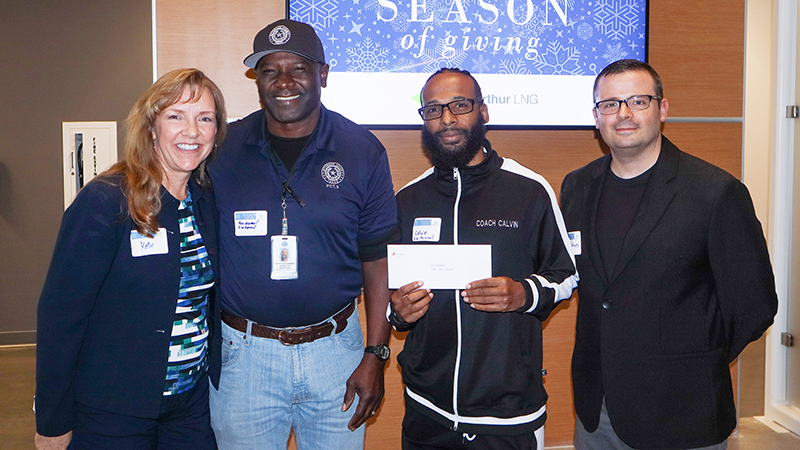 In 2019, Lion Hearted boxing gym was forced to close the doors to its Port Arthur facility, but Calvin Sheppard, who was an assistant coach at the time, made a promise to then-president Eddie Brown to keep the gym going.

“Lion Hearted is the people, not just a gym,” Sheppard said.

Brown started the gym in 2005 as a way to give back to the community and help kids stay out of trouble.

Lion Hearted was one of 13 non-profits that, in November, received grants from the Port Arthur News Season of Giving powered by Port Arthur LNG. The application was for fighter registration for the USA Boxing National Tournament in December.

Sheppard joined the gym after his second tour in Iraq when he returned to the States in October 2006.

“(Brown) opened the gym out of his own pocket,” Sheppard said. “He wanted a place where kids and young people can go as an outlet and have more to do. He told me that when he was young, he was introduced to boxing. He had entered a gym with three other friends and he was the only living friend out of that group of four. The others were lost to the streets.”

Brown, who died after a battle with prostate cancer in 2021, was a pillar of the community, Sheppard said. Brown spent 40 years as a barber and spent part of his time providing haircuts for the youth at the Minnie Rogers Juvenile Detention Center. He and his wife Ora also spent part of their Christmas day with the detainees in 2019, encouraging them to change the direction of their lives.

Lion Hearted Gym, which originally ran off donations from Brown and the coaches, started accepting donations in 2010 after becoming a non-profit organization. The gym does not charge a membership fee.

“If you want to compete, you can compete,” Sheppard said. “If you just want to come and work out and be around people, you can do that. We don’t even ask anyone if they want to compete. I wait for them to ask me about it and then we have a system for that. But, 75 percent of our kids in the gym don’t compete. They are just there for the knowledge and structure and being a part of something.”

Sheppard said he wanted to continue Brown’s legacy because of the impact the gym has on the youth.

“A lot of sports are seasonal,” he said. “Boxing is year round, so you build more of a family connection because you see them so much. In most sports, you have different coaches for different ages. You might have a middle school coach for football and then a high school and college coach. We have had some kids here for 10-13 years. It’s crazy to see how much some have grown.”

Sheppard said he worried about many of the kids after the gym closed.

“I really worry about when they are not in the gym,” he said. “A lot of times, I will take them on the weekends. Sometimes, when we don’t have competitions, I will take them to Austin to train or Dallas or Louisiana. We can’t forget these are still kids. This sport is so demanding, they have to sacrifice a lot of weekends and after school time. I try to show them the world is bigger than Port Arthur.”

While the Lion Hearted searches for a new home, fighters work out at many different locations around Southeast Texas. But Sheppard said he hopes to get a new gym when the timing is right.